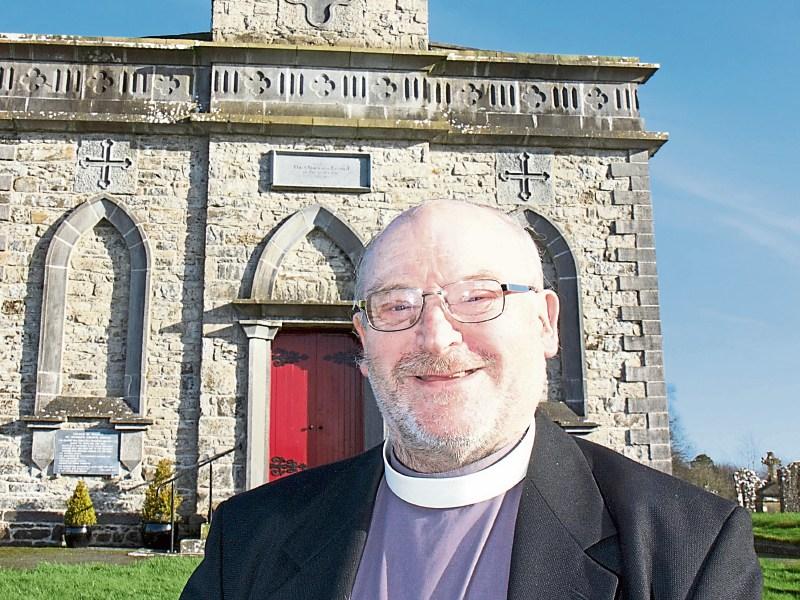 On December 31, 2016 Canon A W Kingston retired after 40 years in rural ministry.

“As I look back on all those years, I feel it may be of interest to others to share some thoughts on those interesting and rewarding years,” Canon Kingston told the Leader.

It was the golden thread running through their lives.”

He went on to say that the structure in the Church of Ireland of the Parish unit provided for a very special form of ministry.

It was a place, he added, that allowed him to provide the spiritual care of people in a certain geographical area where he got to know their family circles, relations and their in-laws, often not only in the parish itself but in the many neighbouring parishes as well.

“Even after forty years,” smiled the Canon, “I was still finding out that someone was related to someone else that I had not known about!.”

Canon Kingston was born and reared on a farm near Bandon in Co Cork.

As a result of this, ministry in a rural parish held  a special appeal - a calling for him.

“The work of farmers is a most interesting way of life, but one which is very much about hard work and long hours,” he continued before pointing out that their lifestyle required  dedication and persistence.

“I believe that in the Church of Ireland, North and South - outside of our main cities and large towns - the survival of many rural parishes and their numerous historical churches attached to them is due to the same dedication and persistence of the local farming-folk who are so often the backbone of rural parishes throughout Ireland.

“Ministry in a rural parish brings with it an extra closeness to the world of nature as you see your parishioners go through a large variety of seasonal jobs in Spring, Summer, Autumn and Winter.”

For forty years, the Canon has enjoyed driving up and down farm lanes and avenues, into the farmyards and becoming informed of the seasonal job that was in progress at that particular time.

“To add to the variety and interest, every family, every house, every farmyard, every lane, every avenue was different, but the welcome was always the same - warm and genuine,” he said.

“Once you had arrived in the farmyard and the barking dog had accepted your 'bona fide' presence, you were taken into the usually large kitchen and before long the kettle was boiling; almost without exception tea and refreshments were part of every visit.”

Looking back now on a life well lived, Canon Kingston says ministry in any parish is a very special privilege when you are given responsibility for the 'cure and care of souls'.

“To knock on a door and be welcomed into that house with the words 'Oh Canon, it is yourself, come on in,you're welcome' is but symbolic of the welcome into people's lives.

“Sharing their 'joys' and 'sorrows' and their 'ups' and 'downs'.

“Over forty  years these have been shared in baptisms, marriages, funerals, confirmation and in many other parish activities and functions.

“When you drive into a farmyard you are entering, so to speak,  in the 'heart' of that farmer's daily work and in that context, a parish visit is an opportunity to affirm him or her in their important work on the land, and in their partnership with the world of nature and God.”

In his rural ministry another task the Canon loved was bringing private Holy Communion to the elderly and housebound, and to the sick in the week before Easter Sunday and before Christmas Day.

“There were also other times throughout the year as required,” he added, before pointing out that he always made a point of administering the Holy Communions before Easter and before Christmas.

“I enjoyed making my way around the lanes and by-ways of the parishes in what was an enjoyable and rewarding time.

“I was like a doctor coming with my little black Private Communion Box which in itself was always part of the topic of conversation as parishioners admired how well and compact it was made.

“Its contents of six items made out of wood, glass and solid silver was always a topic for discussion and because older people have a wonderful store of memories they really appreciate someone who listens to them and shares their past.”

The Canon then went on to take a nostalgic look back on the many ecumenical blessings and official openings he conducted over the years.

“When I was in the parishes in Co Cavan there were only a few of these Blessings and Official Openings, but in Co Longford they were so numerous that I have truly lost count of how many,” he continued.

“Over the 34 years, there would be at least one or two a year and at most there could be four or five a year.

“Items blessed have ranged from GAA pitches to playgrounds and from supermarkets to sewerage treatment plants.

“You name it and I and the local Parish Priest have blessed it!”

As well and because Canon Kingston had five parishes in the Ardagh Group, his geographical area had a corresponding number of six Parish Priests.

So, as he says himself, he had plenty of help for ecumenical Blessings.

“Each year it is held on a different farm somewhere in the County of Longford and I have officiated at it for the past thirty-four years.

“It is an important county event in the farming calendar, with many ploughmen coming from several counties in Ireland (North and South).

“Blessings and official openings were an integral part of my rural ministry.”

After 40 years of ministry in a rural setting, it is clear to Canon Kingston how much a debt of gratitude we all owe to people in the farming community, and indeed to the countryside in general, for the survival of small parishes and their many churches.

“This of course is in no way to belittle or underestimate our fellow Church of Ireland members in our other urban area and in our cities and towns, who very often have their own problems not least of which could be dealing with high unemployment rates in their own areas,” he added.

“I hope I have given you the reader an insight into my world of parish ministry  in rural Ireland for forty years and how it also shows that the Church and Community are inseparable.

“My final words must be that I am grateful to Almighty God for leading me to minister in two rural parishes within the Church of Ireland and for the joy of ministering to such faithful people over so many rewarding years.”