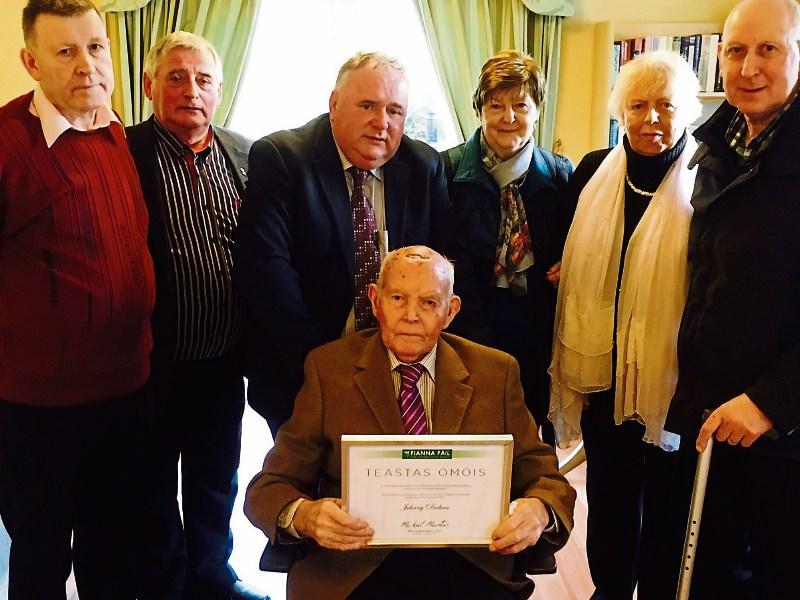 It was a red letter day at Laurel Lodge nursing home recently as the Fianna Fáil party honoured one of its great stalwarts, Johnny Deehan from Ballymagrine, Rooskey.

The life long party member was presented with a special certificate from party leader, Micheál Martin, in recognition of his many years of service and loyalty to the party.

Family and friends joined with Johnny in Laurel Lodge as his local TD, Eugene Murphy made the presentation. It was a great honour for the TD, who said that Johnny had been a mentor to him as he was coming through the political ranks.

From Ballynagrine, Rooskey, Johnny would have hosted all the Clonflower Cumann  meetings in his house and over the years would have worked with, and canvassed for, Brian Lenihan Snr, Sean Doherty, Michael Finneran and the current incumbent, Eugene Murphy TD.

The Clonflower Cumann has since been amalgamated into the Tarmon Cumann  but many locals have fond memories of the Cumann meetings in Johnny Deehan’s house. There was always a roaring fire, plenty of tea and sandwiches and the liveliest of political discourse.

Deputy Murphy added,  “They were great meetings and there was no better place to get an education on roads and roadworks. Johnny knew each and every road as well as the people who lived on them. He had an encyclopaedic  knowledge of his local community.”

Also at the function was Johnny’s proud sister, Mary Cox, who now lives in Ardnacassa Lawns, Longford with her husband, James Cox.

Other great friends of Johnny there for the event were Tommie Hoare, Cumann secretary; Mary D Dowd and Rooskey native and Longford town butcher, Christy Monaghan, who has been a great friend of the Deehan family over the years.

Deputy Murphy said that Johnny had made an enormous contribution to his community and the Fianna Fail party and it was only proper that it should be recognised.