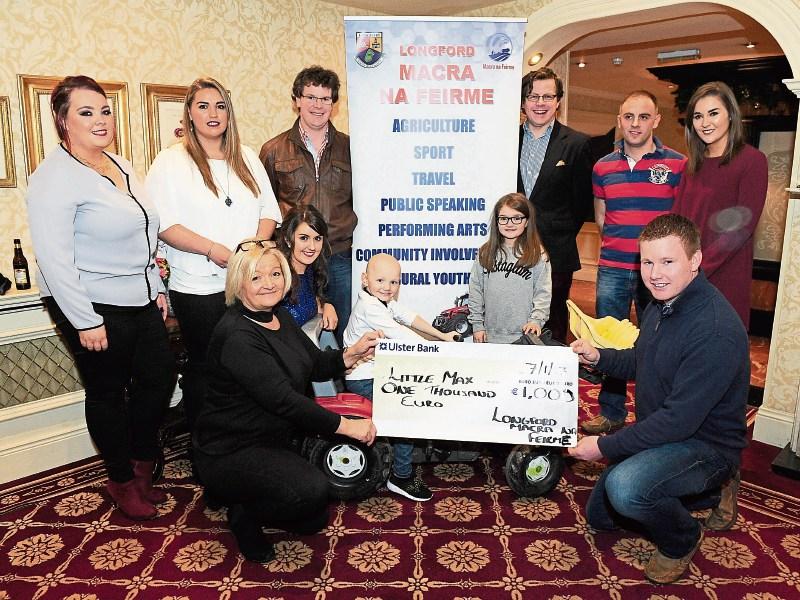 He may only be six years old but mighty Max Wenman from Killoe is currently battling all the odds as he continues his fight to beat Neuroblastoma.

Last week members of Longford Macra na Feirme presented the family with €1,000 from the organisation’s hugely successful ‘Take me Out’ event, which they held at the Longford Arms Hotel on December 30.

The donation was made to Max’s mother Cathy, who told the Leader that her  son is doing “really well” despite a number of setbacks over the past 12 months.

Diagnosed with stage four Neuroblastoma  when he was just two years old, Max undertook a clinical trial treatment and was deemed cancer-free one year later.

Then, aged five, the cancer returned - this time, in his leg.

His mother Cathy said that she noticed her  son limping one morning just over 12 months ago, and after getting everything checked out, doctors informed her that the cancer had returned, and this time it was in Max’s femur.

“As a family we were devastated,” she said, before pointing out that mighty Max had been cancer free for nearly three years up to that point.

By then too, Max had started school in the local national school in Killoe and was doing really well overall.

“His treatment is ongoing now and while it is experimental, he is doing well,” she added.

Treatment for Neuroblastoma is in its infancy and there is no known cure. However, Max is currently undergoing chemotherapy and recent scans indicate that the cancer is not present in any other part of his body.

“The cancer is slowly but surely going from Max’s leg now and his oncologist  is confident that he will be okay,”  Cathy continued.

Meanwhile, the Longford mother-of-five paid tribute to all those who have supported Max and the family in any way over the past few years.

She was particularly grateful to the staff and pupils of St Teresa’s National School in Killoe  whose ‘Mighty Max Fundraiser' at Halloween enabled her to purchase a new car so that she could travel more easily to Crumlin hospital with Max.

“People have been so good to us and I really want to say thank you; it was great to get a new car because the one I had was a banger,” she laughed.

“We are also very grateful to Macra for their very generous donation as well - it is so very much appreciated.”