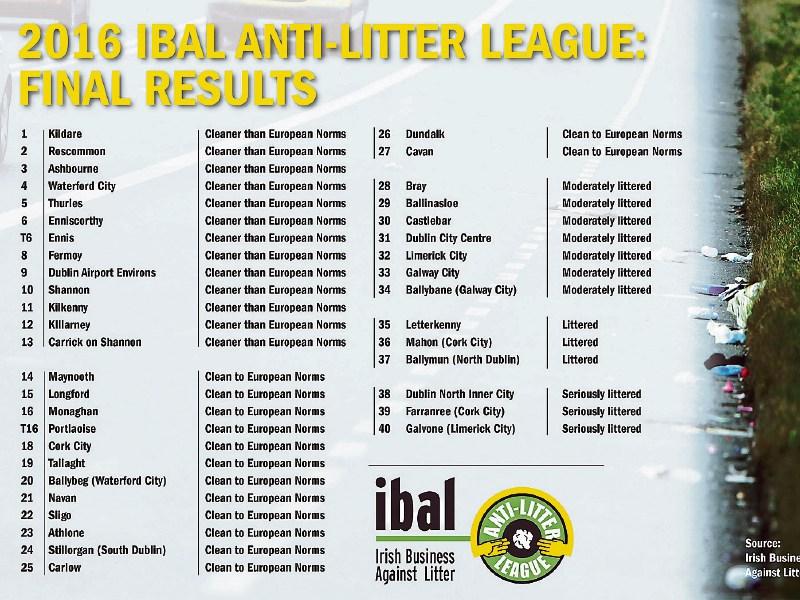 There was some disappointment in the county last week, when Longford awoke to the news that we had slipped off the top spot in the Irish Business Against Litter (IBAL) Anti-Litter League.

This year's competition saw Kildare take the top spot, while Longford was deemed 'Clean to European Norms' at number 15.

Despite the initial shock, however, the report was a largely positive one, with eight of the eleven areas surveyed receiving an 'A' grade.

In its report, IBAL explained; “Last year’s winner came up short in 2016, with one heavily littered site.

“Town Parks Industrial Estate seems to lack the care and attention of other sites in Longford town. It is  hoped that this can be remedied so the town can live up to its previous billing.”

Some of the top ranking sites, according to IBAL, included Dublin Street and the Mall, which were deemed well presented and maintained. The N4 Axis Centre was also a top ranking site, with all areas in very good order and clear of litter.

Receiving a grade 'A', the R194 approach from Granard direction was lauded for the virtual absence of litter, while IBAL stated that a positive overall impression was given on the N4 Approach from Sligo, which was also in the top grade.

The 'olde' style street lamps and hanging baskets on Dublin Street were among the reasons for this area's 'A' grade, and the N4 Approach from Dublin was similarly in order, while the Mall Riverwalk, Longford Sports and Leisure Centre and Albert Reynolds Peace Park all came in for high praise.

With regards to the Mall Riverwalk, IBAL commented that the area, positioned between the street and the leisure centre, was beautifully presented, well maintained and a credit to those responsible for its upkeep.

Despite recent issues there, the bottle bank at the Market Square also came in for praise, receiving an 'A' grade for its tidy appearance.

Food-related litter was an issue for both Longford Retail Park and Main Street, which were both given a grade 'B'.

Meanwhile, Townparks Industrial Estate received the county's only 'C' grade, though Willow Traders was commended for their efforts to keep the area clean.

“Willow Traders deserves a special mention as it was so freshly presented in an area otherwise less fresh in appearance,” the report read. “The remainder of this industrial area, just minutes from the town square, was less well cared for.

“It was characterised by heavy levels of weeds and the low wall and pavement were cracked/broken in places.

“The main thoroughfare in the estate was generally fine but individual sites were frequently poor, not just littered but discarded items included blankets/rugs and general debris/builders’ rubble.

“There were also several incidents of dog fouling.”

Despite a notable drop in the rankings, Chairperson of Longford Tidy Towns, John Farrell, was pleased with the overall report.

The drop didn't necessarily mean that Longford's standards were declining, according to Mr Farrell, but that, other  counties were raising their standards.

Looking forward to the year ahead, Mr Farrell vowed that the Tidy Towns would continue their invaluable work, but would need the support of the local community.

“If Longford wants to get back on top, the only way to do it is through co-operation and support,” he said.