Warm Longford welcome for US Ambassador to Ireland 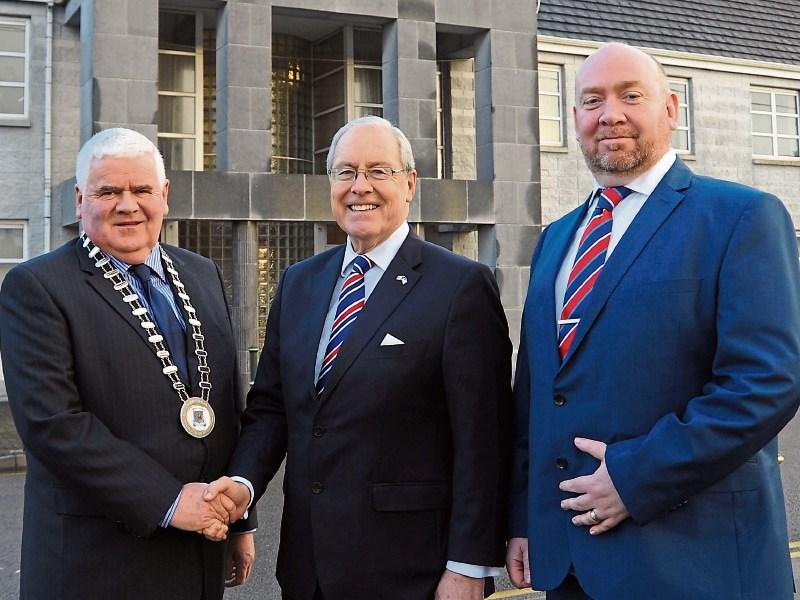 The US Ambassador to Ireland Kevin O’Malley was in Longford recently where he received a guided tour of St Mel’s Cathedral.

The Ambassador, who was on his way to Carrick-on-Shannon, made a courtesy call to Longford Co Council, where he was welcomed by Leas Cathaoirleach, Cllr PJ Reilly (FF).

“The Ambassador was on his way to Carrick and stopped off in Longford to meet with local authority members,” added Cllr Reilly who then pointed out that Mr O’Malley was subsequently given a guided tour of St Mel’s Cathedral by a former member of An  Garda Síochána.

“He was very impressed with St Mel’s Cathedral.”

Meanwhile, the US Ambassador engaged in a meet and greet with local VIPs and was then presented with a piece of Bog Oak by Cllr Reilly.

“It was great honour for me to welcome Kevin O’Malley to Longford,” said the local area representative in the Granard Electoral Area.

“I found him to be very friendly and genuine.”

Kevin O’Malley was sworn in as US Ambassador to Ireland on September 30, 2014 and presented his credentials to President Michael D Higgins on October 8, 2014.

He is also a nationally recognised author of a treatise on jury instructions that is used in federal jury trials throughout the United States.

His Irish credentials are impeccable.

Both of his parents were Irish and his paternal grandparents emigrated from Westport in Co Mayo.

They left Ireland in the early years of the last century; their pockets were empty but they had hope in their hearts, courage galore, and a shared vision for the future.

It seems that they would need it all as they trundled their seven children onto a boat in Cobh and then to Queenstown in 1907 and set sail for a new life in America.