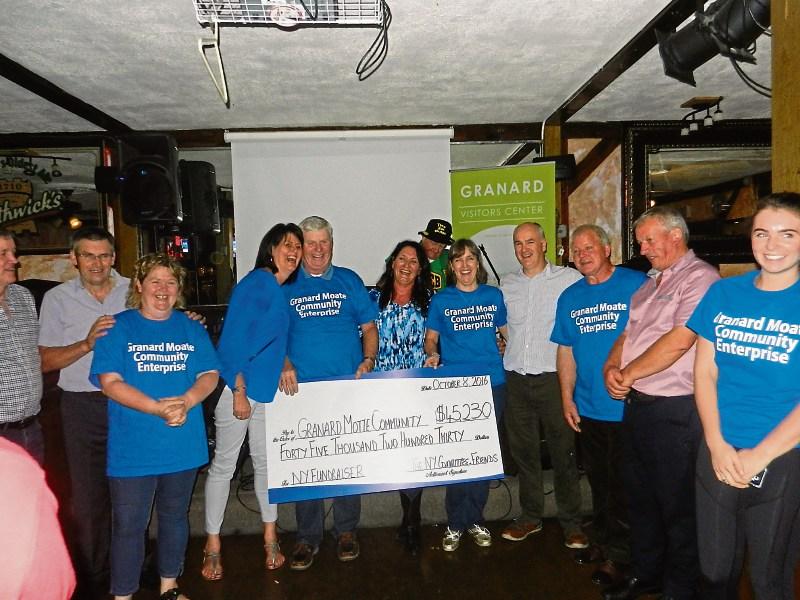 Committee members behind a proposed establishment of a major interpretive centre and heritage facility in Granard believe the project is one step closer to realisation following a major  fundraising drive in the US.

Fresh from a €200,000 cash injection from the Government under the REDZ (Rural Economic Development Zones) Programme, stakeholders in  the Granard Motte Community Enterprise Ltd are upbeat about the project’s long term prospects.

But it is the altruism of  ex-pats across the Atlantic who raised over $45,000  which organisers have been keen to endorse this week.

Central to those endeavours, according to committee member Paul Flood, was the part played by New York businesswoman and Ballymorris native Joan Kiernan.

“There were a couple of local people out there who saw what we were doing, approached us and said 'we would love to help',” said Paul.

Given the group’s foresight in steadily managing to serve the €175,000 mortgage that was used to secure the 15 acre site for close to €300,000 in April 2015, questions remained as to how its members would bring the project to its next stage.

“We had our 500 members draw and still do which we hope will clear our mortgage over the next six years but we needed to raise funds for the development side of things,” said Paul.

“So, when the offer from Joan was made, it was like a manna from heaven.”

Within weeks Joan and her husband Gary set about establishing a working group which also contained familiar names such as Donie and Ann Marie McGivney, Mairead McEvoy, Ann Marie Gaynor Judge and Paul Kiernan (originally of the Greville Arms).

The list didn’t end there. Making sure not to leave anyone out, Paul took his time to rhyme out a whole host of other personalities who also played their part.

“These people just did fantastic work on the ground in organising various draws, events over the summer including a golf classic and a finale that we had in October,” added Paul.

The latter saw around 220 locals from Granard make the trip across the Atlantic, a voyage Paul and the committee still look back in with great affection.

“We were looked after like royalty, put up in free accommodation by various members of the organising committee and couldn’t have been looked after any better,” added Paul.

More pointedly it resulted in the collection of almost €42,000 in fundraising monies which the group now hope will prove pivotal in their bid to secure additional grant aid.

“It means we have a certain amount of matching funds that we can use to apply for various grants be it Leader funding and other areas,” said Paul.

“Our plan is to put in place an indoor interpretative centre and an outdoor heritage style park that, we hope, will be of national importance,” he pointed out.

That vision has taken one step closer to reality thanks to the intervention of the Granard community in the US.