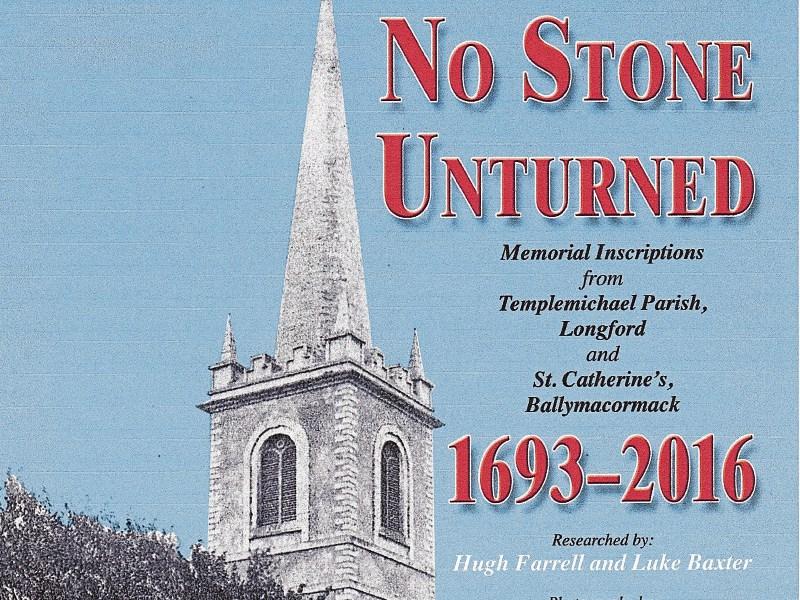 ‘No Stone Unturned', a book based around memorial inscriptions researched by Luke Baxter and Hugh Farrell, with photography by Michelle Ghee, will be launched in Longford County Library on Thursday, December 8 at 7:30pm.

The launch will be performed by the Most Reverend Dr Michael Geoffrey Jackson, Archbishop of Dublin, Bishop of Glendalough and Primate of Ireland.

Giving some insight into the book, Hugh Farrell explained; “In 1986 the late historian Harry Farrell -  with assistance from the Longford Leader - documented the names and date of death on all grave stones in Templemichael and Ballymacormack parishes in a book titled 'Exploring Family Origins and Old Longford Town'.

“Our appetite for more information on those inscriptions resulted in this book, and with Harry’s book in one hand and a soft brush or chalk in the other we set about the task of copying the full inscriptions.”

“The tragedies and the triumphs of Longford are contained within this publication,” Mr Farrell continued. “The work was undertaken four years ago and has been ongoing since. The amount of information on some of those stones is incredible, they contain dates of birth and death, place of birth, and in the case of married women in many cases it gives their maiden names.

“On most of the military tombs it gives short biographies on cause of death, service etc.

“As the Cavalry barracks is in close proximity to St John’s churchyard, many of the burials are soldiers from the famous Cavalry Regiments that served here in times past. The first military related burial was Captain Samuel Forth in 1706.

“British soldiers that fought against the rebels in 1798, at Waterloo against Napoleon in 1815, the Crimea in the Charge of the Light Brigade in October 1854 and the Indian Mutiny in 1857 are interred here,” Mr Farrell revealed. “Rev Francis Little who wrote an eye witness account of the French landing at Killala in 1798 rests here.

With inscriptions being copied by day and researched fully by night, this helped both Mr Farrell and Mr Baxter to trace the lives of those buried from birth to burial.

“It gave us some amazing insights into the lives of people long since gone from this earth and it is hoped will be of great assistance to those tracing their roots in the future,” Mr Farrell concluded.