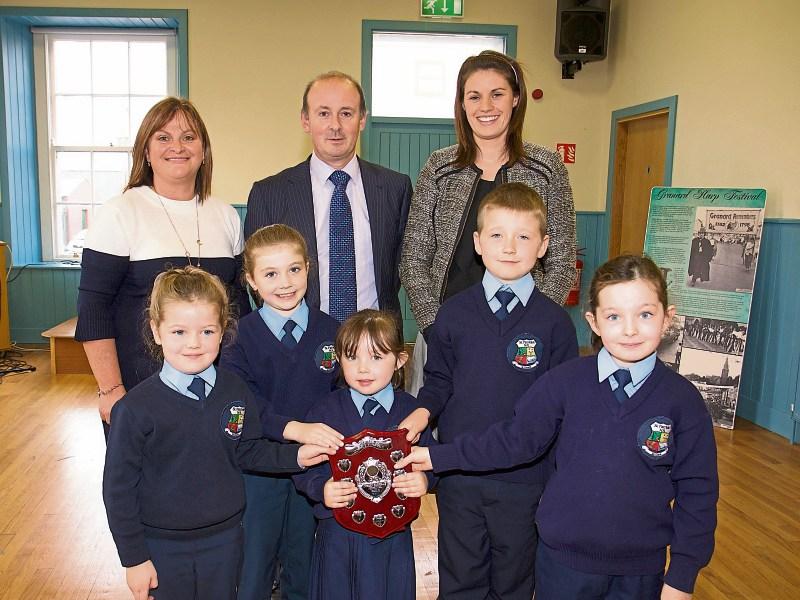 At the end of October, pupils from national schools in the Granard area were presented with their prizes in the art competition that was run in conjunction with Granard Agricultural Show back in July.

This year a new award has been introduced; The Doreen Farrelly Perpetual Shield, and from this year onwards, the accolade will be bestowed on the school that takes fourth place in the overall competition.

The shield is sponsored by Dunphy’s Supervalu in Granard and Canice  Dunphy presented the award to   Killeen National School  at Granard Library.

Ms Farrelly was deeply involved in the Granard Agricultural Show from its inception 64 years ago until her death in the summer of 2015.

It was Bernadette Grier and Doreen Farrelly who initiated the art competition nearly 35 years ago now.

The competition was introduced so that local national schools could become more involved in what was a booming agriculture show which was visited by people from all over the country.

Ms Grier said the art competition had been a very successful project and one which went from strength to strength with every passing year.

She also pointed out that in the earlier years, the show was held every September in a field close to St Mary’s GAA pitch in the north Longford town.

“Doreen Farrelly was a teacher out in Killasonna and she decided that an art competition would be a great way to involve all the local school children,” said Ms Grier before pointing out that the initiative proved to be both challenging and competitive.

Ms Grier then asked the winning children if they knew anything about embroidery these days and when they all admitted that they did not, there was nostalgic smiles all round!

Times have moved on, as they say, and as they did, the success of both the agricultural show and the art competition have done so too.

Chairman of Granard Agriculture Show Mattie Connell paid tribute to all the pupils that participated in the competition this year and pointed out that the  “competition has reached a very high standard now”.

“It was of a very high standard this year and congratulations to everyone who entered,” he added.

“There is some great talent here in Granard.”