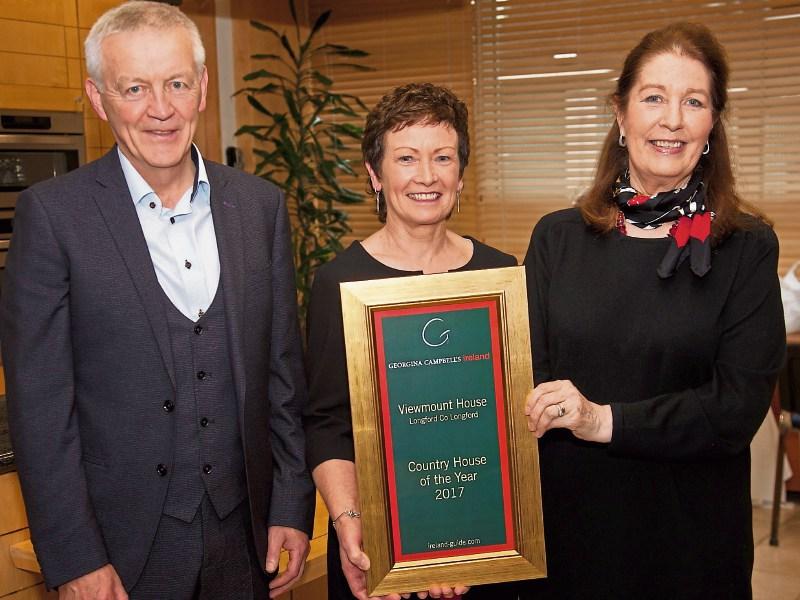 The owners of top Longford eatery and boutique hotel, Viewmount House say its latest Georgina Campbell award is “the icing on the cake”.

Beryl Kearney and her husband James are still struggling to digest last week's accolade which saw the 17th century manor  being crowned Ireland's 'Best Country House of the Year' for 2017.

It was the third such honour to come its way from Ms Campbell, Ireland's leading food and hospitality writer since 2012.

That year saw Viewmount being afforded the Best Sunday Lunch award while in  2014 it took home the Best Restaurant honour.

Details of its latest accolade were first revealed on www.longfordleader.ie last Wednesday after an awards ceremony in Dublin.

“It's the icing on the cake for us,” said a cheerful sounding Beryl on Monday.

“When we bought Viewmount House and moved in in 1990 a lot of people didn't think we would make it but I suppose a mix of determination, foresight and keeping our eye on the ball has made all the difference.”

Paying tribute to her husband, Beryl also reserved a special word of praise of the venue's head chef, Gary O'Hanlon, who only weeks earlier had been heralded  the  top chef in Leinster.

It was a prize the Donegal native scooped at the 2016 Food and Wine Magazine Awards.

Beryl, meanwhile, was just as wholesome in her praise for the creator behind Ireland's longest running hospitality awards - Georgina Campbell.

“Every year she has come to visit us and kept a tight eye on everything that has been going on,” she said. “It's (award) fantastic, it really is.”