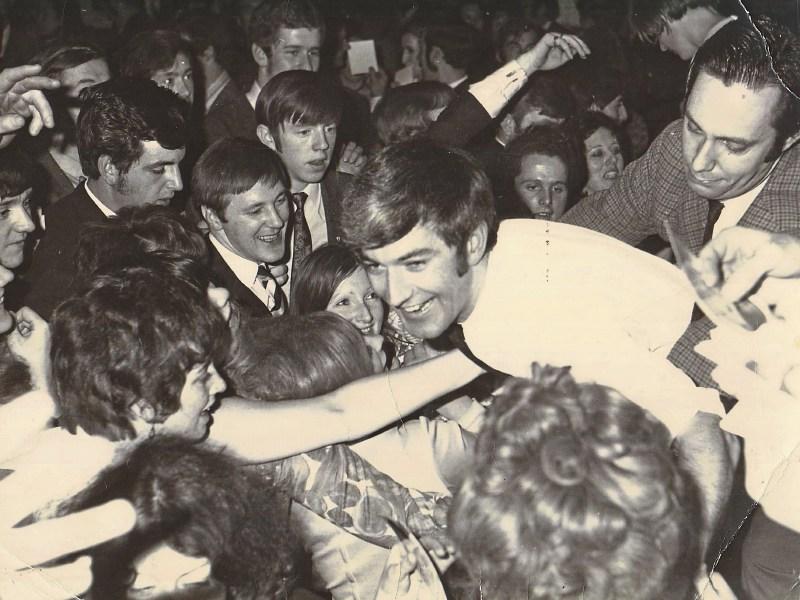 Dermot Hegarty remembers having his first ever piano lesson in Longford with Maura Mannix from Ballinalee. This was in 1946 or ’47.

The lesson was being held in New Street, and  Dermot was just six, at that time.

Dermot’s father – Andrew Hegarty - was born in Donegal, but married a Longford woman, Josephine McHale, known in Longford as ‘Della’.

Dermot’s father bought a farm in Kenagh, 21 acres, and Dermot recalls that on the morning of a fair they’d leave very early – 4am - to get a good “stand”.

Each time they came to a gap on the way Dermot had to sprint to it to prevent the cattle from straying. He reckons that’s what made him fast on the football field playing with Longford Slashers!

The Hegartys lived in New Street, while Fr Tom McHale, a brother of Dermot’s mother, also lived there, so it was a busy household.

Fr McHale was the Christian Doctrine Examiner for the National Schools. In fact his kindly face is something I remember myself, from school days.

Hegarty started in St Mel’s College as a day boy at the age of eleven. In year two his father decided that he should enrol as a boarder, and Dermot went to Mel’s to ‘further his education’ and learn some new ways.

During this time, he was regularly out ‘escaping from college to see shows’.

The President of the college, Canon Kearney was aware of this, and wrote to his father saying: “the experiment of sending your son to college as a boarder has failed. We would advise you not to carry on with this experiment.”

He began college in Dublin, and one night when he was home his world was turned upside down. He was 17 at the time, and his mother called him in the small hours to tell him that his father had taken a turn.

Dermot scrambled from the bed and, ran up the convent road to get Dr McGarry, RIP. He was present a short time later when his father died at 59 years of age.

Dermot remembers it as a terrible time. His mother had to fend for all, and try to make ends meet.

That was that. Dermot was taken out of college to help in running the farm, with the assistance of Mick Clynch of Ballymacormack.

Fate had cast him adrift in 1958 with no jobs to be had in Ireland.

He spotted an ad from Caxton Publishers to sell the Catholic Bible. He applied, and hey presto he landed the job. He became diligent about selling the book all around Ireland with enormous success.

Caxton quickly made him a supervisor, and at 19 years of age Dermot found himself given a Morris Minor car, and three guys to help sell the Bibles.

The Bible cost 11 pounds and 10 shillings, they were getting a commission of 2 pounds for every Bible sold. This was serious money at the time.

Eventually Ireland was saturated with biblical reportee, and they decided to move Dermot to Germany. There he was treated differently, paid on a commission basis, and it wasn't long before the project became unworkable.

Eventually the car broke down on one journey and Dermot thumbed a lift to Dover, and ended up sleeping on a  bench in Hyde Park, London.

He was desperate and contacted his brother Noel, RIP, who took him in, gave him a few bob and a bed, before Hegarty got a job with McAlpine making the tea.

Two weeks, and a strike occurred, and he was out of a job again.

Amidst all this toing and froing, he was living in Kent. Talking to his mother on the phone one day, she told him to try and get a pensionable job.

“Get a job in Jacob's or Guinness’s, and you’ll be set for life,” she said.

Dermot showed his self-belief by writing to the Managing Director W R Honar, in Jacobs, Aintree, Liverpool, and told him in the letter that they “needed him as a representative”!

They called him for an interview, then a second, and appointed him as a rep. His mother was ecstatic.

Around this time, the music scene was starting in England and the pull of music was still dragging at him. He had a little group, playing pubs, and decided to take a break and go to Ireland.

He came to Longford on Easter Sunday 1964, and had hired a brand new Ford Cortina for the trip. His first stop was to see his great buddies Colm Meagher and Ciaran Duignan from Ballinamuck. They started drinking.

Dermot wanted to head to Rooskey to see someone who was once part of St Ciaran’s Céilí band, founded when he was in St Mel’s College.

Feeling on top of the world – in his own mind – he headed for Rooskey, driving, of course, full of confidence.

He didn't get far before he hit a tree. He was pulled out of the car by Phil Davis of Drumlish, and ended up in Navan Hospital. For four months he remained in Navan and suffered extraordinary injuries, including a broken femur, broken arms, broken fingers and damaged ribs. His legs were mangled. Nobody thought, in truth, that he’d ever walk again.

Four months later he emerged from Navan, on crutches, feeling subdued, and went back to Longford to live with his mother, who along with Fr Tom McHale tried to support him.

The Jacobs job was gone, the English group was gone, he had almost nothing.

The one thing he still had in England was a Vox Continental Organ. His sole possession at this stage.

Gradually, his health improved, he began to hobble around.

One night, tired of staying home all the time, he made his way out to the pub of Dick McGarry, RIP, in Rooskey. He saw the piano, and with the crutches, sat down and started to play.

Dick was enthralled, and quickly came out from behind the bar and offered him a job there and then. He agreed to play the piano for 2 shillings and 6 pence a night, six nights a week.

For Hegarty, this was a new life, starting again!

He used to thumb a lift out, and Dick would leave him back to Longford.

Dermot soon bought an old Volkswagen car and one Sunday took a drive – with a couple of buddies – and went to Con Moran’s Four Mile House in Roscommon.

Dermot was drinking orange juice and sat down at the piano and started playing.  Con wasn’t missing much and when Dermot finally got up to leave Con rushed out and asked who he was.

“Dermot Hegarty from Longford,” was his reply.

Con remarked he was on crutches but Dermot asked him if he would be interested in a bit of music in the pub.

He further informed Con that he had a Vox Continental Organ in England and if he was interested, it would be no bother to get it.

They agreed £1.50 per night. The Vox Continental was brought and Hegarty had started his career.

For eighteen months that lasted, with Con paying £1.50 per night and often girls who came in asked him to play at their wedding, which quickly became the wedding and the wedding dance, for which Dermot got £5 altogether.

For more on Dermot Hegarty, see next week’s Longford Leader.