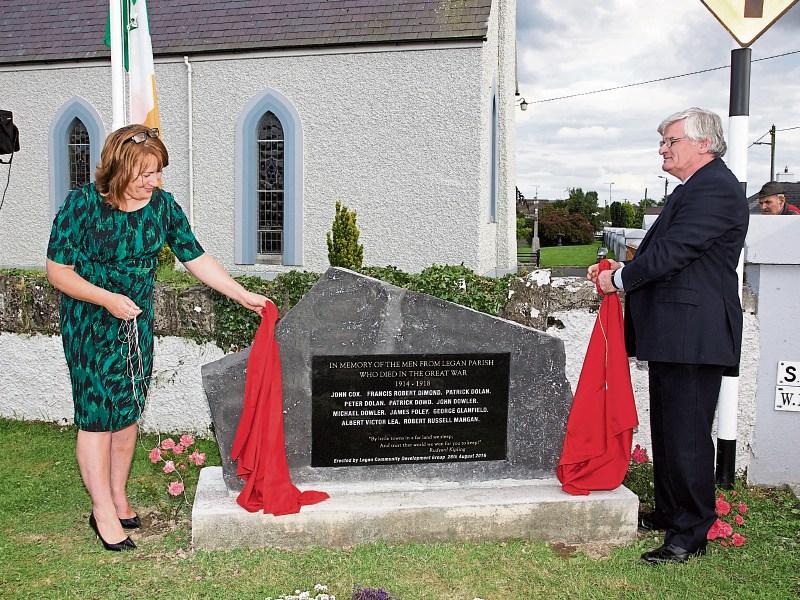 It may have been a conflict often derided, sometimes overlooked, but in Legan last weekend more than 100 spectators played their part in remembering 11 local men who  fought and died in World War One.

In keeping with the many wreath laying ceremonies held earlier this year  to commemorate the centenary of the Battle of the Somme, last Sunday's commemoration was as poignant as it was uplifting.

The afternoon's main centrepiece surrounded the unveiling of a  limestone monument etched with the names of the 11  former Legan natives who lost their lives in the Great War.

That was accompanied by a string of speeches from Cathaoirleach Cllr Mick Cahill, County Archivist Martin Morris and relatives of those who died.

Among those to take to the stage was Hugh Farrell, Chairman of County Longford Historical Society.

He told audience members that the south Longford village was no different to most other parishes dotted around the country that were affected by conflicts involving Ireland and Britain.

He said while Legan mourrned the loss of 11 of its former sons, more than 40 parishioners actually took part in one of the bloodiest wars in human history.

In welcoming the decision to commemorate those who had lost their lives, Mr Farrell said: “It is a fitting testimony to the bravery and sacrifice of those who died a century ago on the battlefields of Europe.

Arguably the most memorable incident Irish soldiers became embroiled in, he said, took place much later.

The Siege of Jadotville is readily viewed as of one of the most successful defence actions in modern military history.

The event, which has since become the subject of a Holywood blockbuster tells the story of  150 Irish soldiers, who in 1961 fought off 3,000 Congolese rebels and mercenaries backed by artillery and fighter jets.

Mr Farrell revealed 15 of those hailed from Co Longford, one of which included surviving Legan man, Sean Dowler.

Mr Dowler himself, was afforded the opportunity of raising the tricolour shortly afterwards as the day's formalities came to a close.

Local County Councillor and MC for the day, Paul Ross said the occasion was one that will live long in the memory.

“It really was a terrific day and we weren't expecting the crowds we got which was great as it turned out,” he said.

The Fine Gael councillor said the idea behind the  project had stemmed from a similar ceremony in Edgeworthstown 12 months earlier.

“Over 40 people from our parish left to go and fight with no one predicting how long it would last or how terrifying a battle it would be,” he said.

“Eleven   died from  our parish and we felt it would be fitting to commemorate those with this everlasting monument.”