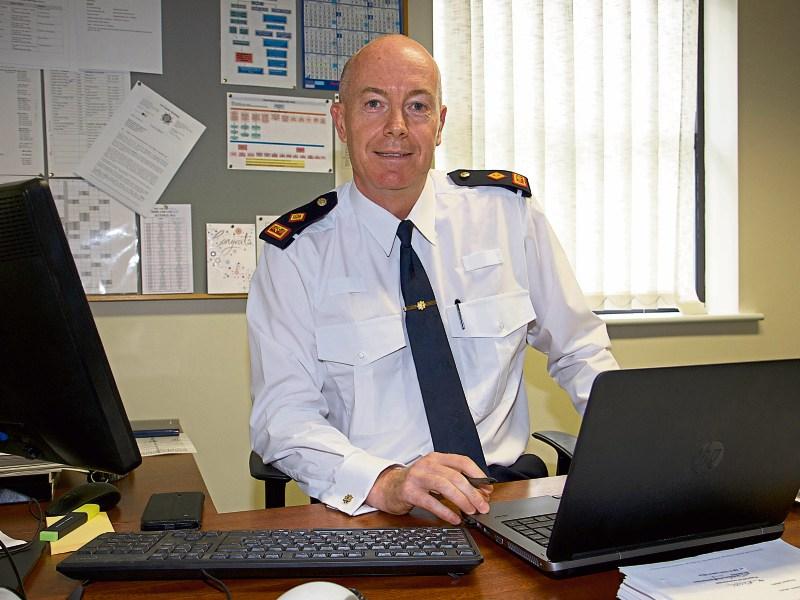 He may only be a couple of weeks behind his desk, but newly appointed Superintendent Jim Delaney is already setting his sights on making an indelible mark as Longford’s most senior garda official.

Supt Treanor had only been in the post for just over a year, taking over from Denis Shields who had been in Longford for six years.

The hope in Longford now is that the new superintendent will remain in the county for the long haul.

Having joined the Gardaí in 1984, it’s fair to say Longford’s latest superintendent has more than served his apprenticeship.

“I am 32 years in An Garda Síochána and during that time I have to say I am very fortunate to have worked with some very professional, excellent people both within our own organisation and in other agencies,” he proudly asserted.

Half of that three decade spell was spent working in a series of specialised Garda units in the Dublin Metropolitan’s Crumlin and Tallaght districts.

Those endeavours culminated in promotion and a transfer to the then Longford Westmeath Garda Division to tackle drugs in this region.

As Detective Sergeant in charge of one of the first dedicated Divisional Drugs Units nationwide, the onus on ensuring its success was obvious.

“That unit was based in Athlone but covered Longford, Mullingar and Athlone,” Supt Delaney revealed.

“During that time we had some very notable successes of regional and national significance in relation to the size of seizures.”

Among them included high profile discoveries  of ecestasy, cocaine, heroin and cannabis resin.

The introduction of new legislation, most notably the imposition of the 1996 Section 2 Drug Trafficking Act was a further factor in helping the  specialised drugs  units.

One of the many seizures which garnered local as well as national headlines was the seizure of 25,000 ecstasy tablets from a property in Longford town.

Those achievements opened further doors, leading Jim to become involved in the  Gardai’s ‘Stepping Out’ initiative

“That was facilitated by the National Learning Network and was funded by the Department of Justice by providing training and rehabilitation to criminal offenders of which I was very proud to be part of,” he said.

By 2007, further career acclaim came calling when Jim was elevated to the rank of Inspector, only this time at an entirely different facet of policing.

“That was when I served as a Divisional Traffic Inspector in DMR East and would have had responsibility for overseeing a number of traffic operations connected with the development of Luas in south Dublin, specifically a number of Luas bridges installed over the M50 and M11 motorways.”

The best part of a decade on, it was a time he believes served him well.

“It was an enjoyable challenge and a quick learning curve having spent a lot of time in crime,” he admitted.

“It was an experience that I was able to bring with me when I moved into my next role as a district inspector in Carrick-on-Shannon District in 2008.”

Stationed there for the past eight years, the last four of those were spent serving as Detective Inspector heading up a string of noted investigations into organised crime, dissident activity and murder investigations, some of which are still before the courts.

Being in charge of such renowned cases brings with it its own challenges, not least in the emotional wrenches it places on the  families of victims.

“When I look back on them, I think of the families of the victims,” he said.

“I will say in one particular case in a trial in 2014 it struck me the level of commitment the family had in support of the victim.

“As a senior investigating officer there would be a certain amount of detachment and obviously you are meeting many of these families in very difficult circumstances who have lost loved one in very tragic, traumatic circumstances but we have specially trained people, family liaison officers and they are the people who work with families on a day to day basis.”

But leading well known crime investigations are only part of the story.

In more recent times, Jim has had the honour of putting the required logistics in place for the G8 Summit in 2013 and the visit of Prince Charles and the Duchess of Cornwall Camilla two years ago.

“I was also fortunate enough to be involved with security preparations for the inaugural sitting of the Cabinet in Lissadel House and I was particularly proud of how they transpired.

Supt Delaney, however, is conscious of the many challenges the organisation still faces.

He believes an ongoing programme of renewal and modernisation will go a long way towards meeting and overcoming those.

“We have to move with the times,” he commented, but stopped short of issuing any direct appraisal of how the recent Garda whistleblower controversies may have dented its public perception.

“We have embarked on these programmes (of modernisation) before regardless of any controversy and I am not going to talk about any of that.

“I am aware that as an organisation we have taken some considerable criticism in the media but we get on and go about our business irrespective of that.

“We have a community out there to serve and we can only change people’s opinion in the manner in which we serve and do our business.

“We have excellent people and it has been hard for them to maintain the level of dedication and commitment they have done while the media has been so volatile but that is what is being a national organisation is all about.”

In terms of his own immediate aspirations in Longford, Jim’s message is simple.

“The first thing I want to do is to maintain and develop the well established links with the Longford community,” he stoically put it.

Resources, he insists are not an issue at the present moment.

More pressing, for him, is the need to foster a greater focus of tackling crime at source.

“I may have a strong background in crime investigation but I am also keen to promote a focus on crime prevention.

“This can be achieved through partnership.”

It’s an ethos Jim is anxious to permeate amongst his officers and the wider public at large.

“Our organisation has traditionally been an organisation that has had a strong connect with the community,” he insisted.

He backs this up by citing the famous quotation by its first ever commissioner Micheal Staines’ statement that the Gardaí ‘will succeed not by force of arms or numbers, but on their moral authority as servants of the people.’

“If there was one quote from me it would be of ‘partnership and community engagement’ so that between all of us we can surmount the challenges that we as a policing organisation face in the 21st century,” he concludes.