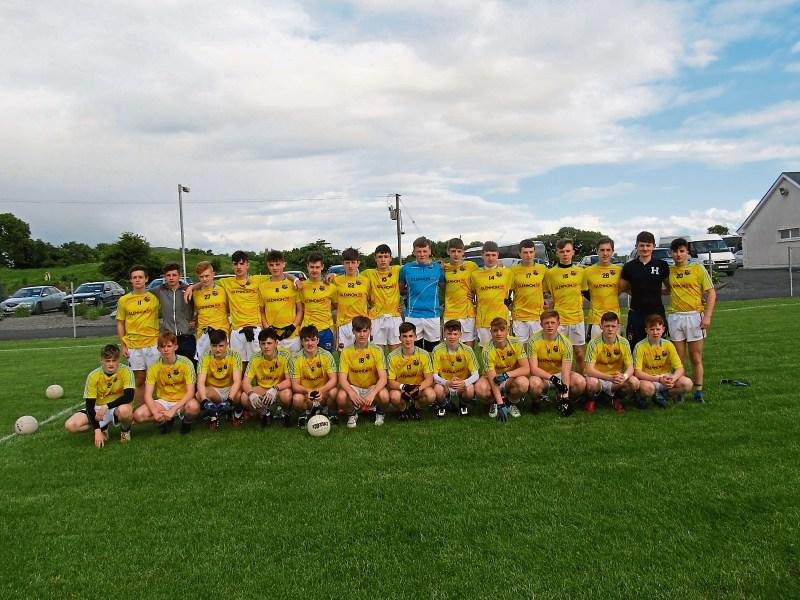 Longford U-16 footballers had to settle for second best against a stronger Louth side, who ran out most emphatic winners of the Gerry Reilly Tournament Shield Final between the third placed teams in the two groups with the game played in Oldcastle on Saturday last.

A superb first quarter from Louth had the outcome of the game in little doubt as they ran riot to clock up 3-6 before Aidan McGuire opened Longford's account in the 16th minute.

After that terrible opening quarter, Longford were playing catch up for the remainder of the match and although outscoring their opponents in the second half Derek Duggan's side were fighting a losing battle.

The high ball into the heart of the goalmouth was again a problem for Longford and they were caught out in the first minute when Tristan Knowles finished the ball to the back of net. That was the beginning of an onslaught for the next 15 minutes as Louth looked to wrap it up early.

Man of the match Ciaran Keenan excelled throughout from centre-half-forward and his 1-1 and general influence from open play in the first quarter was a real thorn in Longford's side.

Keenan's goal after 15 minutes put 15 points between the sides with a depressing 3-6 to 0-0 on the board, a demoralising turn to the scoreboard for the Longford supporters in attendance.

Aidan McGuire, Jordan Shiels, Ronan Lynch and Longford's major outlet Dylan Farrell added to the tally with scores but it was only a quick lapse as Louth added a further 1-2 before the half-time whistle with Tristan Knowles scoring his second goal.

Longford did improve things in the second half but one wonders was it the up in their performance or the drop in Louth's, who were sitting on the cushion of such a commanding lead.

Longford had the gap back to 7 with 5 minutes to go with goals from Ronan Lynch and Dylan Farrell, the latter score an absolute rocket from the Killashee man.

Mistakes cost Longford again though, conceding 1-2 in the closing minutes to fall to a heavy 12 point defeat and they will have to improve substantially for the Fr. Manning Cup campaign later on. The  management team will have to sort out the bad starts and silly mistakes if the county U-16s are to make an impact in the prestigious tournament.