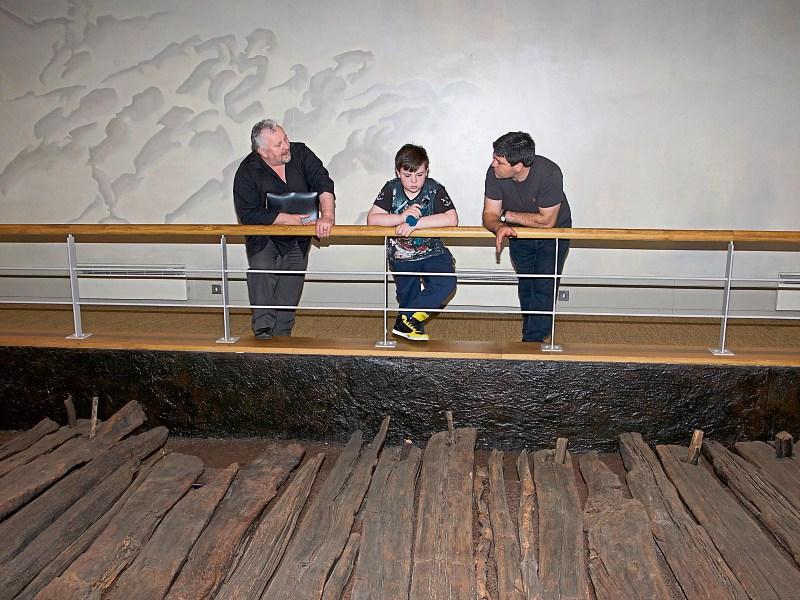 Corlea Trackway is truly one of the midlands’ hidden gems  and as the Leader discovered on a recent visit, it is a bit too hidden for some people’s liking.

There have been complaints in the past about poor signage to the facility, not just in Kenagh, but from major local towns as well.

Despite this, the Trackway  has been declared one of the top ten destinations in the midlands to visit and the Leader headed out recently to tour the trackway and visitor centre and speak to visitors there.

It truly was a wonderful couple of hours in the company of Noel Carberry who is not only one of the most informed people in the country on Corlea but someone who also allowed open discussion as the tour progressed.

The visitor centre at Corlea interprets an Iron Age bog road which was built in 148 BC across the boglands close to the River Shannon.

The road  is the largest of its kind to have been discovered in Europe and inside the building an 18 metre stretch of preserved road is on permanent display in a specially designed hall.

Bord na Móna and the Heritage Service have carried out conservation work on the surrounding bog to ensure that it remains wet and the buried road is preserved.

There is much hope that the latest tourism initiative in Co Longford - Ireland Ancient East  - will incorporate Corlea Trackway into its plans thus advancing the magic of the region.

At the start of the tour participants were introduced to wood carvings, many of which resemble animals; an ash carving of a bore -  a rare piece with the original housed at the national museum - appears to represent a territorial God during the era.

Fast forward a few hundred years and research traces a link with the Irish midland bog to a tribe in Germany - The Cauci.

Meanwhile in the Irish midlands, over 100 trackways - buried in bogs - were discovered within a 15 mile radius.

“They discovered that a lot of the trackways stopped in the middle of the bogs and did not lead to anywhere else,” explained Mr Carberry who is also a very accomplished musician.

“As a result of this, it was determined that the trackways were designed to bring people into the bogs so they could make their sacrifices to the gods; they would have been rituals specific to that time.”

Those on the tour last week also heard that the local trackways connected the two Hills of Uisneach - which was the seat of power before Tara - and Rathcroghan.

Mr Carberry said that the Trackway located at Derrahaun (Killashee/Kenagh) was most likely connected to Queen Maeve!

The trackways were made of timber, mostly oak because this was long lasting, however as more and more research was carried out, it was discovered that ash and birch were also added at various areas along the trackway.

Mr Carberry also pointed out that while many archaeologists believe that trackways were physically covered with bog matter by the people of that era, there was also substantial evidence to prove that they most likely fell back down into the bogs over time.

“Everything for the trackways,” he added, “was prepared where the oak trees were grown”.

It was time then to examine the trackway for ourselves which is enclosed in a temperature controlled room at Corlea Visitor Centre.

Soon a discussion on bog bodies began and it is fair to say that there have been a number of  significant finds in respect of this in numerous bogs across the country over the years.

Mr Carberry says that there is evidence now to suggest that many of those bodies were offered as human sacrifice and the gods at the time were associated to Lunas and the fertility of the land.

“The sacrifice,” he continued, “would ensure that people had a good harvest that year”.

For Donal Dunne  and Matthew Monaghan from Lanesboro, the tour was fascinating.

It had been 15 years since Donal  was last at the facility and he was impressed with the advancements made there in the intervening years.

“The building is great here now,” he smiled, before pointing out that he was also greatly impressed with the various models around the place.

“We came here today because Matthew actually said to me that he would like to visit a museum and when I thought about a museum here in Longford, I couldn’t think of anything.

“When I Googled, Corlea Trackway came up, and when we got in here I could see his eyes light up.”

Mr Dunne went on to say that he could never figure out how birch and oak could be used together as one was durable and the other wasn’t, yet both were used in the construction of the trackways.

“This place has come a long way since I was here and there is a wonderful sense of bog life here.

“It is a gem right here in Co Longford and it is a really nice experience to come here.”

When the Leader checked the visitors' book on the way out of the building, we discovered that Italian, Spanish and Irish visitors had stopped into Corlea Trackway and Visitor Centre earlier that day. It seems that more people are discovering Longford’s hidden gem.

For more on Corlea, see this week’s Longford Leader.