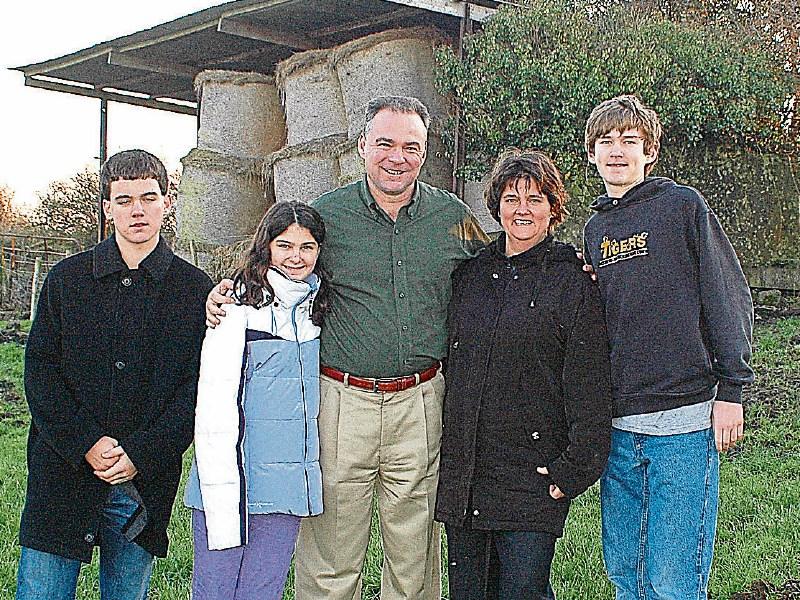 Killashee hit the national headlines this week when it emerged that Tim Kaine, whom Hillary Clinton has chosen her nomination for Vice-President in the forthcoming Presidential election, has strong local connections.

Local people found themselves guiding TV crews through the area while national newspapers reported on Kaine’s strong Longford connection. The news has caused considerable excitement in the parish, with some people joking that a “Tim Kaine Plaza”, similar to the Barack Obama Plaza in Moneygall, could soon become a reality.

The Longford Leader first featured Tim Kaine in 2006 when he visited the county with his family.

His great grandfather PJ Farrell was born in Derryadd and emigrated to the US with his family when he was just four years old.

When he visited the site of his homeplace in Derryadd, Killashee in 2006  with his wife Anne and children, Nat, Woody and Annella,  he found a hayshed on the spot where his ancestral home used to be. Just two walls of the old homestead remain.

The Longford Leader’s Declan Shanley recalls the visit very well. A native of Derryadd, he brought the Kaines to the site and even had the family in for tea and apple tart in his home afterwards.

“He was a lovely man, very proud of his Irish roots,”  Declan recalls.

He remembers the one thing that struck the teenage Kaine children when they visited his house.

“I had a basket of turf beside the stove and they were amazed when they seen it because they had never seen turf before!”

The Kaines arrived with an armed security team decked out in long coats and sunglasses travelling in cars with tinted windows.

It was, he admits, an incongruous sight in the heart of rural Longford.

“They wouldn’t come into the house for tea, they just stayed outside,” he explained, adding that they let Mr Kaine walk down the mucky fields to the ‘old house’ on his own as well.

“They didn’t chance the fields either!”

Mr Kaine's ties to the county are very close indeed.  His great great grandfather was Patrick Farrell from Killashee and he married Mary Milnamoe from Templemichael in Longford town.

His great grandfather, and son of Patrick, was PJ Farrell who was born in Derryadd and emigrated to the US at the age of 4.

Accompanied by some of his brothers and sisters, the family settled in Illinois and later in Kansas.

“PJ married and went on to have eleven children,” Mr Kaine explained to the Leader during his visit to Killashee in 2006.

“The second youngest Annella, was my paternal grandmother.”

Annella passed away before Mr Kaine was born but his daughter Annella - who is now 20 years old - is named after her great-grandmother.

The Farrells settled in another Longford - Longford,  Kansas  which is situated in the centre of the United States and heavily focused on agriculture.

“In a way it makes sense that people from Longford ended up here [Kansas],” he added back in 2006.  “My mom and dad came back to Killashee in the mid 1990s to see the old home and since then I too wanted to visit.”

When he arrived almost 10 years ago now, he announced “this is something I have wanted to do for a long time”.

Hugh Farrell of the Farrell Clan said these latest developments in the United States were “very important” for Co Longford.

“Longford will be in the public eye and we are all happy about that,” he smiled.

“We would all be hoping that this situation will strengthen ties between the families and with Longford.

“It’s a long time since Longford had links to the White House, so let’s hope they win now!”