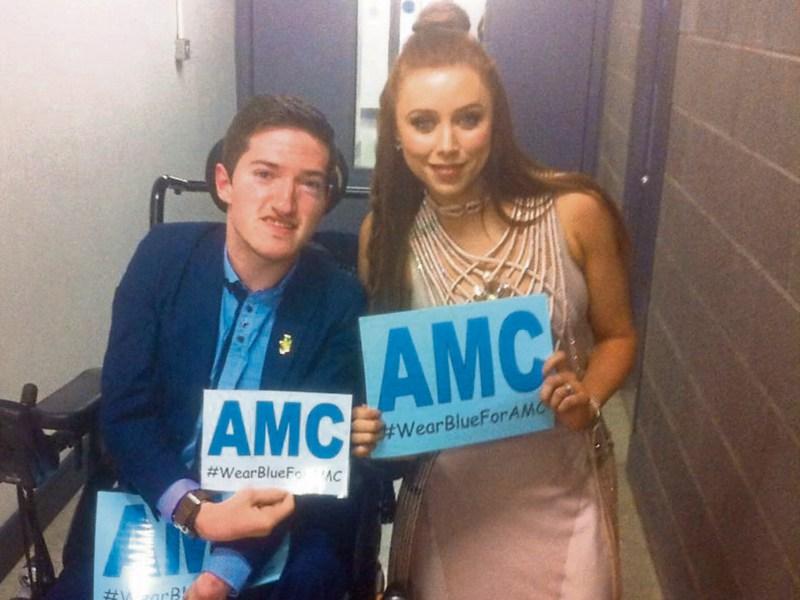 Almost €1,900 was raised for the Arthrogryposis association of Ireland at a fundraiser held in Cassidy’s, Drumlish on June 11.

The Big Blue Celebration was organised by local teacher James Cawley, who was born with Arthrogryposis Multiplex Congentia (AMC) which affects his upper and lower limbs and spinal cord. It was the second such fundraiser organised James  as part of his online awareness campaign.

Confined to a wheelchair, James was told he would never write with a pen but has continued to defy all the odds and power through with his mission to abilities rather than disabilities.

Having joined the  Arthrogryposis Association of Ireland at the age of 18, James assumed the role of secretary and over the past two years has led an astounding countdown to June 30, International AMC Day.

The celebration in Cassidy’s was another major mark on the calendar on the way to June 30, and, delighted with its success and the great reaction the campaign received, a delighted James was extremely grateful to the community of Drumlish and all who supported and attended on the night, particularly those who travelled to be there.

Revealing that the event had raised a total of €1,858.20, James wished to thank Tom and all at Cassidy’s, the decorating team and all at Village Flowers, Drumlish. He also offered a sincere word of thanks to those who kept the crowd entertained all night; DJ Monty & The Afters Band, Podge Gill from Brave Giant and Kat Mahon, as well as Justin from The Blizzards and members of White Chalk who attended on the night.

James also wanted to thank the following: Dial-a-Chef; Sinead and Ken Photography for the photo booth, awareness signs and snaps; Pat Corrigan Transport; Stephen Brady and all who donated.

“Also, a big word of thanks to people for supporting the awareness campaign the last two years,” James continued. “To those who got involved in the all ability bowling and football events

“Thanks to my family and friends for helping me on my journey of normalising disability and taking the ‘dis’ out of disability!”