Longford marks 100 years since the Battle of the Somme 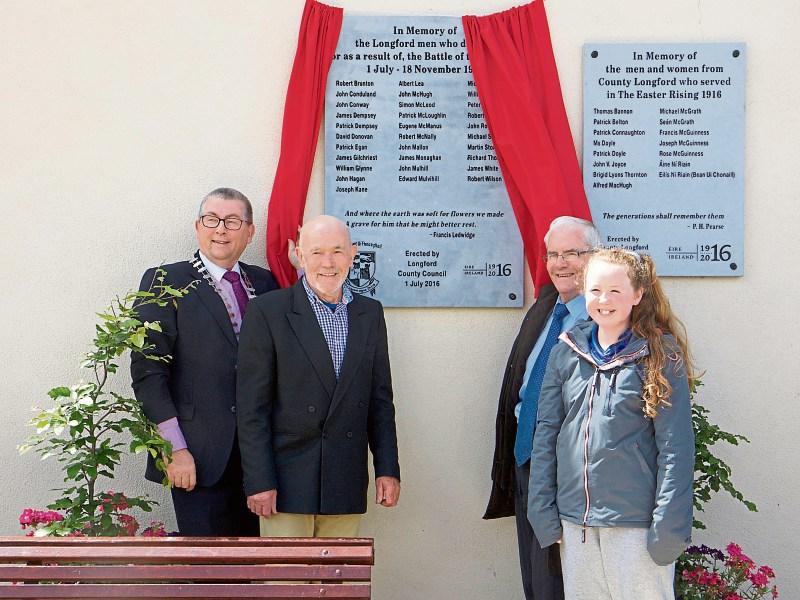 Described as a ‘special’ and ‘historic’ day by County Librarian and County Co-ordinator of Ireland 2016, the atrium at Longford County Council hosted last Friday’s commemoration of the Battle of the Somme.

Welcoming all in attendance, particularly the families of those who fought and died in the battle 100 years ago, Ms Carleton Reynolds said: “We’re a very united group here today because we’ve all come to commemorate a very major event in our history”.

The crowd were then led in prayer by Fr Tom Murray, an active member of Longford Historical Society and Longford Centenary Committee, and Canon David Catterall, whose grandfather was a despatch rider at the Somme, before Cathaoirleach of Longford County Council, Cllr Mick Cahill gave his first official address since he assumed the role recently.

“The 31 Longford men who are being remembered here were among 7,000 Irish men who died at the Somme,” Cllr Cahill stated. “All were young men and they joined the army for a variety of reasons. They died in one of the bloodiest battles of the first world war and sadly many of them have no graves.”

Paying tribute to the Centenary Committee, especially former Cathaoirleach, Cllr Gerry Warnock, as well as the staff of Longford County Council, Mary Carleton Reynolds, Mairéad Ní Chonghaile and Martin Morris for their motivation and dedication in remembering the events of 1916, Cllr Cahill pointed out that in commemorating those who fought in the conflicts of 1916 “we should be mindful of their hardships and of the need for us to do everything possible to have peace in our world”.

Luke Casserly and Gabrielle Flynn, members of Longford Comhairle na nÓg then stepped forward to recite Francis Ledwidge’s ‘Lament for Thomas McDonagh and Tom Kettle’s ‘To My Daughter Betty: The Gift of God’, before Longford Voices United delivered a set of songs from the era, with which  the audience  enthusiastically joined in.

It was then time for the formalities to take place and the Peter Keenan branch of the Organisation of Ex-Servicemen (ONE) took over the mantle to lead the minute’s silence. ONE drummer Christy Devlin then accompanied Brendan O’Brien (great-grandson of Patrick Dempsey), Evelyn Reilly (granddaughter of Michael Reilly) and James Larkin (relative of Joseph Kane) as they read the roll of honour.

The men's names, as well as some details on their backgrounds, are available on a special commemorative poster, which can be ordered from the Longford Library.

Hugh Farrell of Longford Historical Society was the next to address those gathered and he offered some information about the battle and the men who took part.

Mr Farrell spoke of the men who lived to tell their tale and also lauded the efforts of the women left behind.

“It was they that kept things together at home. When their loved ones died in the war they reared large families alone in a state that was unsympathetic to their plight. It was they that looked after those that were maimed physically and mentally.

“They preserved the memory of the fallen and wounded while the rest of society forgot them.”

According to Mr Farrell, by the time the Battle of the Somme ended, one million soldiers were either dead or so badly scarred that they required care for the rest of their lives.

“Today we wonder what it was all about but we cannot but admire those who got off the fence, got into uniform, and stuck their necks out. They endured bullets, shellfire, gas, hydrogen and death for the sake of their fellow man.

“Their families here today should be justifiably proud of these brave men and the huge sacrifice they made in France a century ago today,” he concluded.

Thankfully, the torrential rain that fell for much of Friday gave way to sunshine as the plaque, designed by James Cooney, was unveiled in the Remembrance Garden on Great Water Street by Jasmine Smith (great grand-niece of Michael Smith) and Danny O’Hara (grandnephew of Peter O’Hara).

Afterwards, the General Salute and Last Post were performed by the Peter Keenan ONE, before the raising of the tricolour by President of the branch, Steve Coy and Bridget Carrigy, a niece of John Mallon.

The Reveille by Bugler Paul Kiernan and Drummer Christy Devlin and the national anthem, led by Longford Voices United rounded off a day which perfectly encompassed the 1916 - 2016 theme of remembering, reflecting and re-imagining.