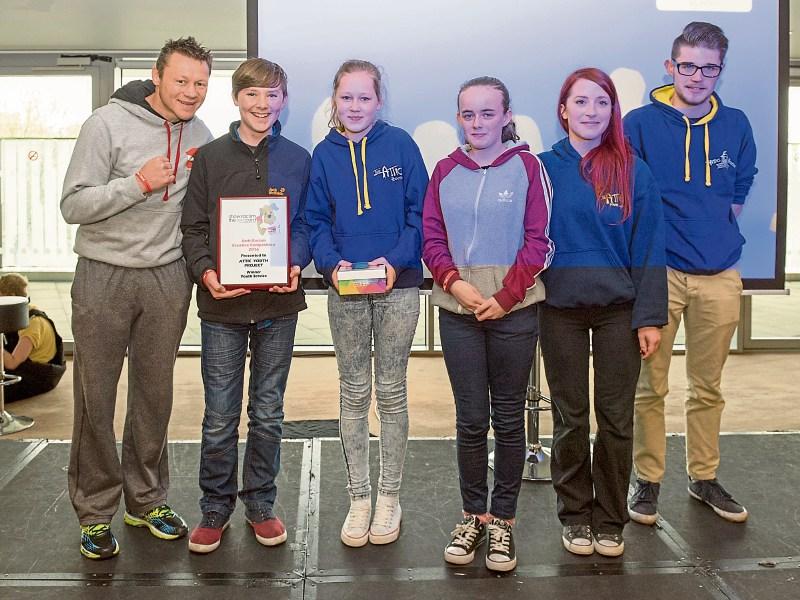 A team from The Attic House Teen Project won the Youth Service Award at the Show Racism the Red Card creative competition awards ceremony in Dublin for their video, ‘Don’t Discriminate’.

The video and accompanying song – which were both produced and directed by the young people from The Attic House– portray a strong integration and equality message.

At the recent awards ceremony, prizes were awarded for entries ranging from songs and raps to posters, videos and social media campaigns.

Garrett Mullan, Executive Director of Show Racism the Red Card, congratulated the Longford winners on their fantastic entry and praised them for their commitment to the competition.

“The talent and creativity we saw in this year’s entries was better than ever before,” he said. “The young people involved really demonstrated their commitment to promoting integration and anti-racism messages within their schools and wider communities and The Attic House’s video is a shining example of this.”

MC at the awards ceremony was sports presenter Tommy Martin, and special guests included Steve Guppy, coach to the Ireland football team; Cllr Cieran Perry, Deputy Lord Mayor of Dublin; John Boyle, Vice-President of the INTO; Razan Ibraheem, a Syrian journalist based in Ireland; and footballer Conan Byrne and boxer Oisín Fagan, both of whom are Show Racism the Red Card ambassadors.

Further information about the work of Show Racism the Red Card is available at www.theredcard.ie