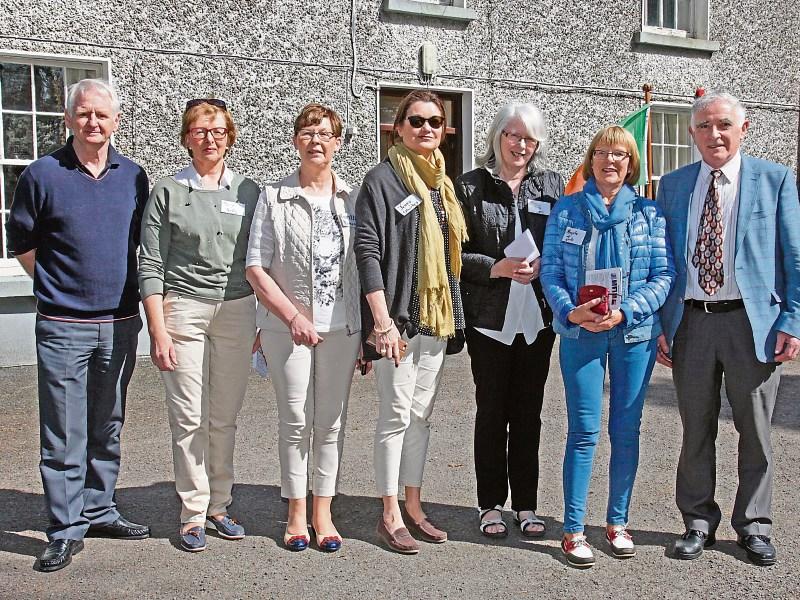 The sun shone brightly in Edgeworthstown for the Annual Maria Edgeworth Literary Festival which once again was a tremendous success.

Retired teacher Eamon Brennan got proceedings off to a lively start with storytelling in the Rectory, an inspired location as Maria Edgeworth would have spent time in this house as would Oliver Goldsmith and more than likely many stories were told here in the past.

Following this session, Mary Melvin Geoghegan announced the winners of the Poetry Competition which this year had a Centenary theme. The winner of the much coveted Deirdre Purcell perpetual cup went to Mateusz Sadowski (St Michael’s Boys NS), second place went to Lolu Adejinmi, (St Michael’s Boys NS) and third was Brona O’Meara (St Mel’s NS, Ardagh). The winners recited their winning entries to the packed audience who were also entertained by young harpist Sharon Brown.

Following the presentation, the ever popular guided walk by Matt Farrell, taking in the important historical sites associated with many literary figures from Edgeworth to Wordsworth and Wilde got underway. Walkers heard the wonderful stories associated with these historical figures and got to enjoy the places of interest.

The evening session was held in the wonderful atmosphere of St John’s church and what a wonderful two hours of entertainment with a talk on the effects of the famine in Edgeworthstown given by Professor Ciarán O’Reilly, this was followed by a musical performance by the O’Reilly family whose performance consisted of music and song associated with the founding fathers of the State.

This was followed by the much anticipated session with internationally acclaimed writer Belinda McKeon who read from here to top selling novels Solace and Tender and discussed the topic of “home” in writing. To round off the evening the audience was treated to the majestic voice of Denise Fulham.

It was great to see Denise back performing at the Festival as she first appeared over ten years ago as a young budding singer and what a performer Denise has become. There was a surprise for the audience as they the church with the appearance of five illuminated spirits in the adjoining graveyard - part of artist Tom Meskell’s work for Longford 1916 where he worked with community groups to create life-size human lanterns to commemorate the innocent people lost in 1916 rising.

The audience and performers adjourned the The Mostrim Arms Hotel for a session by the local Joe Callaghan Ceoltas group. The festival committee headed by Angela Tuite once again pulled off a wonderful event which showcased the very best of one of Longford’s most historic towns.