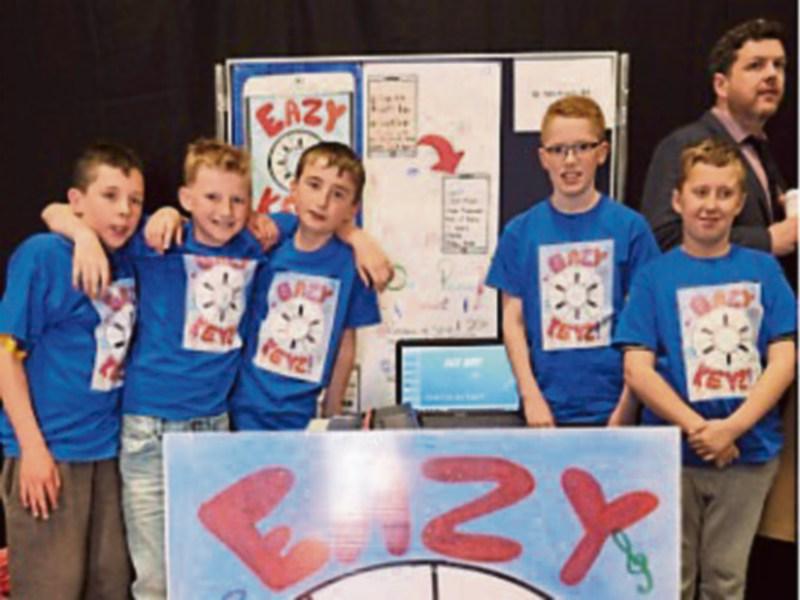 A team of pupils from St. Michael’s NS in Castlepollard have claimed third prize in a national student enterprise competition.

The team was competing in BIZ Factor, an annual competition organised by BizWorld Ireland.

The team from St. Michael’s NS was comprised of Luke Gilchrist, Aaron O’Leary, Lucas Holtkamp, Aaron Daly, and Evan Roddy. They were selected to compete in the national BIZ Factor final because of the high quality of their business idea, ‘Eazy Keyz’, an app aimed at making piano lessons more affordable, easier and more fun. The app links pianos with a smart device and then helps children to play music by lighting up the piano’s keys.

At the BIZ Factor final, which took place in the RDS, Dublin, as part of Tech Week, the Castlepollard boys had to pitch their ‘Eazy Keyz’ business idea to a panel of high-profile judges, including: BizWorld Ireland Ambassador and founder of Casey Games, Jordan Casey; entrepreneur and investor on RTE’s ‘Dragons’ Den’, Gavin Duffy; Group Managing Director at Alternatives, Charley Stoney; Head of External Collaboration at ESB, John McKiernan; and MD at Irish TV, Mairéad Ni Mhaoilchiaráin.

The judges awarded third prize to the St. Michael’s NS team, and they were presented with their prize by the Lord Mayor of Dublin, Críona Ní Dhálaigh.