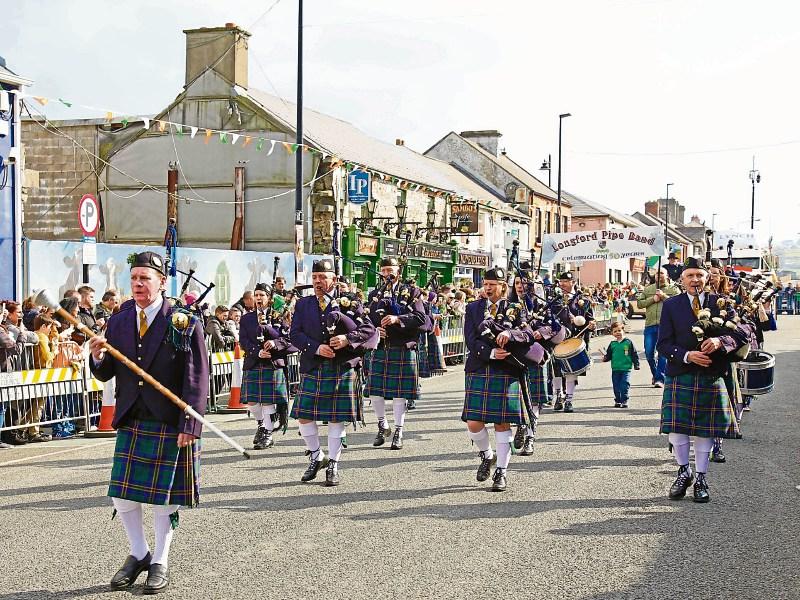 Whether it's the St Patrick's Day parade, the County Final at Pearse Park, or outside St Mel's Cathedral on New Year's Eve, the Longford Pipe Band has been a familiar sight at public gatherings across the county and further afield ever since its formation in 1966. And right now the group is busier than ever, thanks to the numerous events coinciding with the centenary of the 1916 Rising, in a year which also marks the band's golden jubilee.

“It all started with an idea of the late John Lynch's and he called a meeting at the Temperance Hall back in 1965,” explained James McGuinness, whose family name has become synonymous with the Longford Pipe Band.

“There had been a brass and reed band before it, but it didn't last. We decided on bagpipes because there weren't many bands playing pipe music at the time, so it was something different. John approached the commandant at the barracks in town about using the facilities to practice. We had to join the FCA in order to use the barracks!”

Tom McGuinness said: “We played St Patrick's Day in London in 1969 and in Dublin in 1970. The council noted that our band had to go away and that was what spurred the effort to get the Longford one going.”

Another memorable day out for the band during those early years was the 1968 Leinster Final at Croke Park, where Longford famously beat Laois to claim the title.

“We played at half-time and then we did what no other band had done before; we paraded around the field after the game, too,” John recalled.

Benny continued: “And then we marched out onto Jones' Road with the crowd following us – and the pickpockets, too!”

Perhaps the Longford Pipe Band's greatest undertaking was its participation in New York's St Patrick's Day in 1994. A massive fundraising effort was required, with the Longford Association in New York, local businesses, house-to-house sponsorship calls, and even church gate collections all contributing.

Benny added: “We've played for several presidents, including Patrick Hillery, Mary Robinson, Mary McAleese, and Michael D Higgins. We also played for Maggie Heckler when she was the US Ambassador to Ireland.”

For John, who has been known to wear a Slashers jersey under his band uniform during marches to Pearse Park, County Final Day is a particular highlight.

“We've played over 50 County Finals, including replays,” he revealed. “That's just at senior level – it doesn't include junior or intermediate finals.”

Fifty years on from the Longford Pipe Band's early practice sessions in Connolly Barracks, the group maintains a link with that area of town, now practicing across the road in St John's Hall.

“We normally practice once a week,” Benny explained. “But we'll practice twice a week if we have an event coming up.”

“We're very busy this year,” Christy added. “Every weekend – in fact, even during the week – we've been out with flag raisings and other commemorations connected to 1916.”

Gráinne McHugh (née McGuinness) continued: “Our two big events each year are St Patrick's Day and the County Final but there are loads of others, too, such as the Ploughing Championship.

“For the first few years, I was handed the pipes and pretended to play to make up the numbers!”

While he is optimistic about the future of the Longford Pipe Band, Christy Devlin admitted there will be challenging times ahead: “Our biggest issue right now is getting more members. Without the McGuinness family, there wouldn't be a pipe band.”

For more on this story, see the current issue of the Longford Leader.