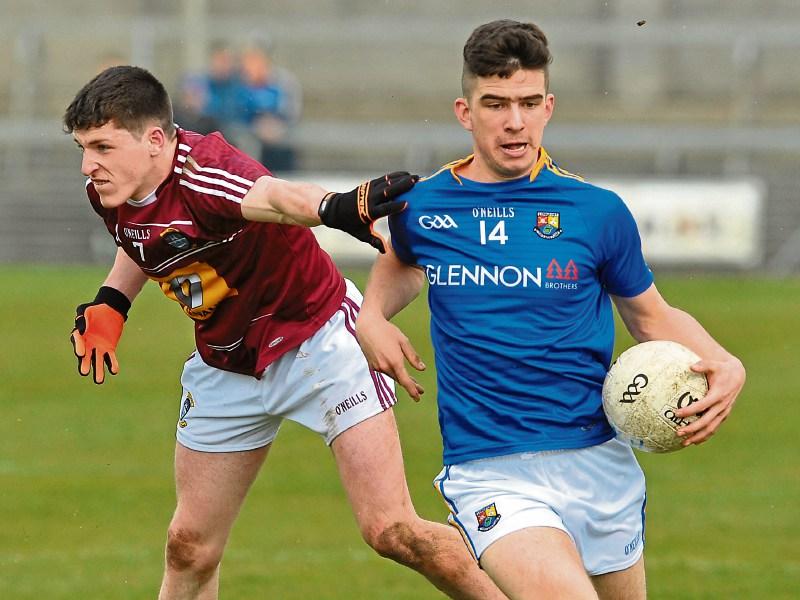 After the high of reaching the Leinster Minor Football Championship Final last year, Longford suffered a disappointing defeat against neighbouring rivals Westmeath in Round 1 of the current campaign at Cusack Park in Mullingar on Saturday last.

Goals at crucial stages of the local derby shattered the hopes of the county U-18s and while they enjoyed a lot of possession the pressure of falling behind so early in the game got to the players who were guilty of making a number of costly mistakes.

While Longford will get a second chance in the qualifiers, they are facing a difficult task against Offaly on Tuesday evening next (6.45pm) to determine who advances to take on Wicklow for a place in the championship quarter-finals on Saturday May 21st. Tony Devlin’s side will have home advantage against the faithful county who were well beaten 2-14 to 1-7 by Dublin in the first round proper last weekend.

There was just 20 seconds gone on the clock in the clash at Cusack Park when Westmeath corner-forward Dylan Carroll finished the ball to the net and when the completely unmarked left-half-back James Maxwell fired home a second goal in the 12th minute, Longford trailed by 2-1 to 0-0.

Conor Dillon registered the point for the home side, who had another clear-cut goal chance in the 6th minute when Daire Hynes shot straight at Longford keeper Jack Fox, and Longford had to wait until the 14th minute for their opening score.

Rory Hawkins converted a free and while the gap was gradually closed following a further four scores through Hawkins (play), Joe Kelly (who almost found the back of the net in the 23rd minute), Peter Lynn and Kelly (free) Longford were left to rue the missing of a few frees in the first half.

It might well have been a different story had Hawkins not squandered a glorious goal chance when he shot wide from close range in the 27th minute and Longford dominated the second quarter of the contest in a determined bid to get back into contention.

Westmeath ended up leading by 2-2 to 0-5 at the break, with Tom Molloy kicking their other point, and while Longford made a bright start to the second half when Thomas McGann shot over the bar it all fell apart thereafter.

The home county came storming back to enjoy a glorious spell which yielded 1-3 without reply between the 34th and 38th minutes with Daniel Reid blasting the ball to the net for the killer third goal that finished off Longford.

The points were fired over by Conor McCormack, Tom Molloy and Daire Hynes and after Ruairi Harkin landed a very good strike for Longford in the 40th minute, Westmeath quickly regained the upper hand to extend their commanding advantage with a further three scores from McCormack (free), Molloy (free) and Hynes.

Longford now trailed by ten points, 3-8 to 0-7, in what was not a true reflection on the actual trend of the game, and they battled it out to the bitter end in adding five more scores to their tally through Joe Kelly (two frees), another brace from substitute Ciaran Reilly (both from play) with captain Enda Farrell also on target.

A couple of good goal chances fell to Ronan Healy, the second of which was brilliantly blocked down by Westmeath defender James Maxwell in the 57th minute. And while Longford were six points adrift at the final whistle they are a better team than this and hopefully they will make amends in the must win ‘back door’ showdown against Offaly at Pearse Park.