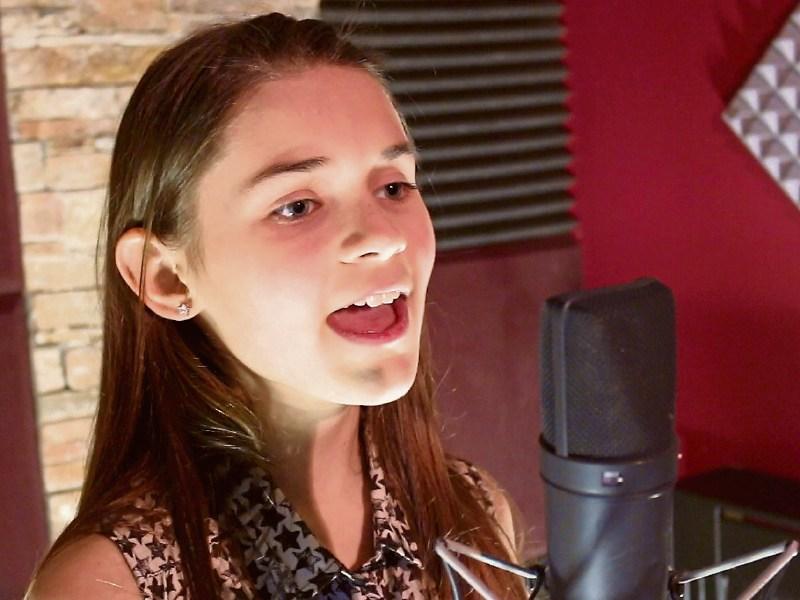 There are few people in the region - and probably the country - who have not heard the name Caoimhe Mooney, after the 11-year-old's rendition of traditional ballad 'Grace' went viral.

Caoimhe, the daughter of Cara and Ronan Mooney, Drumsna, is a member of Longford's Evolution Stage School, and after winning her local schools Scór with the song, gave a performance of it to her Evolution classmates.

Filmed and uploaded to Facebook, the video quickly became popular, racking up over 118,000 views to-date.

Seeing this success, Evolution teacher Paul Hennessy brought Caoimhe to record the song with Paul Gurney and the resulting video has been viewed more than 160,000 times and shared thousands of times by individuals and media outlets around the world.

What's more, the recording has also caught the attention of Frank O'Meara, who wrote 'Grace' with his brother Sean in 1986.

In an email to Paul Hennessy, Frank asked the teacher to pass on his best wishes to Caoimhe, stating; “There are many fine versions of 'Grace', but i have to say Caoimhe's version is up there with the best.”

“It's just grown legs for Caoimhe now,” said proud mother Cara, who is a native of Carrickboy. “None of us are singers in our family, so it has come from out of nowhere.”

Explaining that Caoimhe first sang at her uncle's funeral four years ago, Cara admitted that as parents, the highlight of the fifth class pupil's performances has been her increasing confidence.

“We're so chuffed that she has the confidence to stand in front of people and perform,” Cara said.

Thanking Paul Hennessy, Paul Gurney and singing teacher Martina Rynn for helping Caoimhe develop her talents, Cara added; “Thanks to everybody for such a positive response and making her feel like a star.”

For Leitrim's latest celebrity, the attention came as a surprise, but an entirely pleasant one.

“I felt excited and I also felt very proud of myself,” Caoimhe said of her online success, adding that she learned a lot from the recording process.

Looking forward to recording some more tracks in the future, the talented young girl also revealed that she recognised the meaning of the song every time she performed it.

“I really enjoyed performing the song, I did kind of feel sad performing it because it's such a sad song but I enjoyed singing it and knowing what it meant,” she told the Leader.

Indeed, the emotion that Caoimhe puts into the song has brought many of her thousands of fans to tears, and when asked how she felt about that, Caoimhe laughed; “I was delighted hearing it - I know that's not the nicest thing to say because I made them cry!”

Aspiring to be a singer when she's older, Caoimhe has well and truly taken her first steps into the profession, with the song now available on iTunes, Google Play and YouTube.