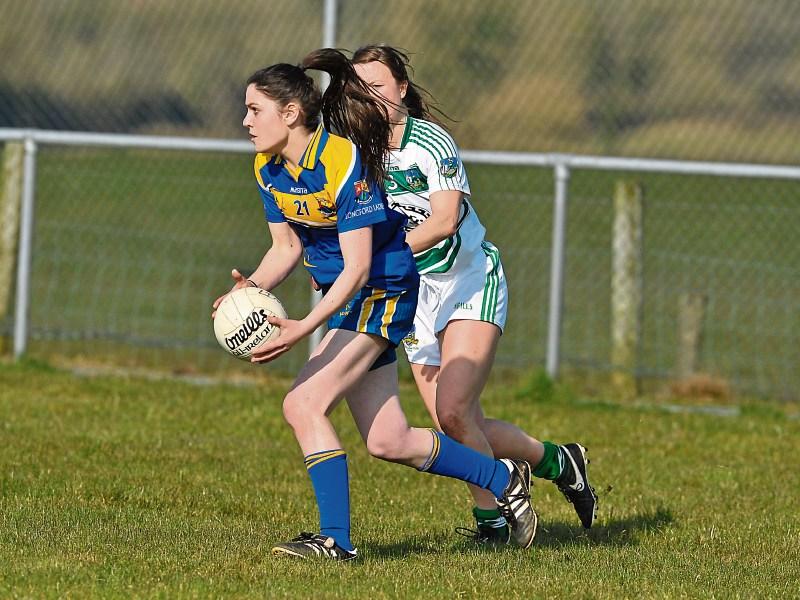 Since losing narrowly to Louth in the opening round, the Longford ladies have embarked on a most encouraging winning run in Division 4 of the National Football League and achieved another positive result in getting the better of Limerick at Keenan Park, Ardagh on Sunday last.

Managed by Micheal Bohan from Fenagh in Leitrim, the Longford girls emerged victorious to clinch a semi-final spot and worked really hard to consolidate their tight grip on the game when centre-half-back Mairead Moore was sin-binned at the start of the second half for what appeared to be a harsh yellow card.

Well-taken goals from Aisling Reynolds (9th minute) and Michelle Farrell (11th minute) laid the foundations for the fairly emphatic win over Limerick and the home county could have found the back of the net at least three more times such was the superiority they enjoyed in the first half of the contest played in perfect conditions on a fine sunny day.

A shot from Reynolds hit the crossbar in the 14th minute but Longford had a lucky escape in the 30th minute when Claire Coughlan was clean through in a slick Limerick move but she blasted the ball wide when a goal was there for the taking.

While Longford were guilty of squandering several other scoring chances they still ended up in a comfortable 2-6 to 0-5 lead at the break with three of the points coming from Aoife Darcy (one free) while Orla Noonan (the opening score for her side in the 3rd minute), Aisling Reynolds and Michelle Farrell also shot over the bar.

Limerick’s most dangerous forward Dympna O’Brien accounted for four points (three frees) in the first half, with Stephanie Carroll also on target, and they closed the gap with further scores from O’Brien (free) and Margaret Ryan in a tight third quarter with Longford defending exceptionally well with 14 players.

Losing Michelle Farrell, who was forced to retire injured in the early stages of the second half, was a significant setback but Longford were determined not to let victory slip from their grasp and they came storming back to fire over five points in a row to lead by 2-11 to 0-8.

The scores were registered by Aoife Darcy (2), Aisling Reynolds, substitute Emer Heaney and Mairead Moore, the latter operating in the attack for the remainder of the game when she was brought back on, and the Longford cause was certainly helped when Limerick midfielder Yvette Moynihan was sin-binned in the 49th minute.

The home side side were also reduced to 14 players again when Mairead Reynolds was sin-binned in the 55th minute. Another point followed late on from Moore while Reynolds got her second goal in the fourth minute of the lengthy stoppage time from a penalty, awarded for a foul on Heaney.

Limerick battled it out to the bitter end and their efforts were rewarded with two points from top scorer O’Brien along with a consolation goal from substitute Orlaith O’Donoghue in the sixth minute of stoppage time.

Longford’s remaining fixture in Division 4 is at home to Antrim on Sunday April 3rd before the pairings for the semi-finals can be confirmed.