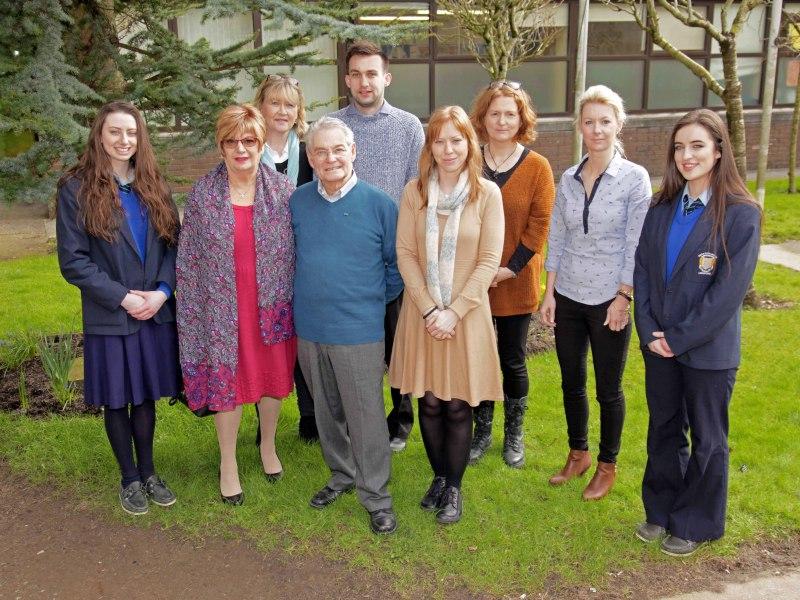 On Thursday, March 10, our school, Meán Scoil Mhuire, was honoured to receive a visit from Holocaust survivor Tomi Reichental.

Mr Reichental is a regular speaker in schools, where he is a living testament to the truth of the Holocaust for a new generation. This was a momentous day for our school and undoubtedly will remain a profound and memorable event for students in years to come.

Tomi’s story was both poignant and eye-opening. He himself confessed that he relives the painful memories of his past so that future generations will not forget or deny the brutal reality of the Holocaust.

Born in the remote Slovakian village of Merasice, Tomi recalled fond memories of his life before the Tiso regime began to impact lives of Jews living in Slovakia. Under this fascist dictatorship, Slovakian people saw their country ally itself with Germany and they became victims of the Nazi regime. Tomi told the heart-rendering story of being only six years old when he was forced to wear the star of David and how at such a young age he became a victim of intimidation and abuse because of his religion.

In the innocence of his youth he recalls the ‘’happy days’’ when his cousins left Slovakia as the first group of Slovak deportees to be sent to Germany in 1942 in the hope of better prospects in employment but unfortunately this was not the case. During the war period, an estimated 58,000 Jews were deported from Slovakia but only between 200 and 500 survived the Nazi regime.

Unbeknownst to Tomi the situation for Jews in Slovakia was only to worsen as the strict laws of the Jewish codex intensified after the failure of the Slovakian rebellion leading to the German occupation of Slovakia. This made life very difficult for Tomi and his family as they were forced to hide from constant Gestapo raids.

For many months the Reichentals evaded arrest and, after obtaining false papers, they made the decision to flee to Bratislava where they hoped to emigrate abroad but sadly, they were arrested by the Gestapo in Bratislava along with 13 other family members. Tomi was only nine years of age at the time, his brother Miki was thirteen and their grandmother was 79.

Following the arrest, Tomi and five of his family members were transported to Bergen Belsen concentration camp, forced to endure horrendous travelling conditions where 60 people were confined in a cramped cattle cart. Tomi described this experience as the end to civilised life as he knew it.

After enduring a week of these horrific conditions, the inhabitants were then filed out and forced to walk a “death march” for two and half hours in miserable weather conditions (temperatures could drop to as low as -25 degrees). The horror was amplified when they reached the camp.

Bergen Belsen was located in Northern Germany and during winter periods experienced unbearable cold. It housed around 55,000 inmates and was divided into seven camps in which men and women were segregated.

Although it wasn’t an extermination camp, hundreds died each day as a result of the illnesses caused by the bitter cold, starvation and horrendous living conditions. As a result, the crematorium in Belsen ran 24 hours a day.

During his time at the camp Tomi witnessed death regularly and had to suffer the loss of his own Grandmother who became just another skeletal corpse to join the mounds of corpses covering the camp.

Tomi’s appalling ordeal eventually came to an end on April 15, 1945, when British forces liberated the camp.

“We didn’t understand what liberation meant but we knew we were free,” Tomi told his rapt audience.

Today, Tomi travels tirelessly around the country, speaking to all kinds of groups about his experience of the Holocaust. This is so that people will never forget the horrors that occurred and to ensure that they will never happen again.

He also bravely speaks about the importance of ending racism and social discrimination, encouraging people to accept each others' differences because, as he pointed out; “it’s wrong”.

“Nobody stopped it when it was happening to us, and look what happened to us.”