Honouring the work of local businesses 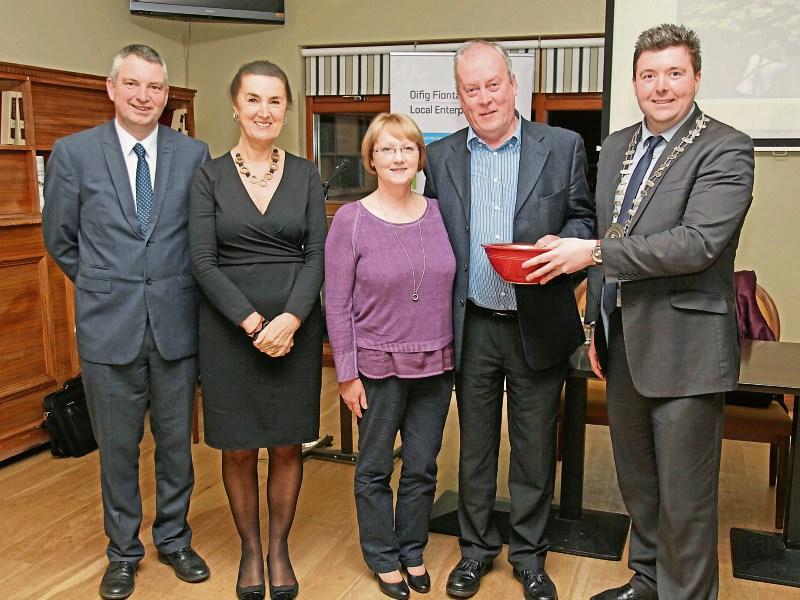 The event which is run in conjunction with the Longford Enterprise Office has gone from strength to strength since its inception in 2001.

Cathaoirleach of Longford Co Council, Cllr Gerry Warnock, who addressed those present on the night, said the event provided a platform on which local businesses were rewarded for their hard work and endeavours.

“These awards were designed to recognise the achievements of the small indigenous enterprise sector - a sector that provides over 80% of the employment opportunities in our country,” added Cllr Warnock.

“In my opinion it is the small indigenous business that has kept the economy going over the last eight or nine years during a recession that is one of the worst this country has ever seen.”

The company which is run by Pauline Belton has expanded over the years, since the entrepreneur opened her first salon in Longford town in 2000.

Sixteen years on, the business is going from strength to strength with a salon in Carrick-on-Shannon, Co Leitrim and Castlerea in Co Roscommon.

Pauline also established Belton Wedding Fairs and Belton Wedding Planning and two years ago she identified a gap in the market for training and practical hairdressing workshops.

The workshops are designed for up-and-coming barbers and hairdressers, and focus on providing the trainees with practical experience as well as training.

The Grafters brand is synonymous with quality in the midlands and the workshops, which have been running for 12 months, now have further added to the company’s success story.

Pauline has also been working in conjunction with the traveller community here in Longford town and 12 girls from the community completed a training course at Grafters recently.

Pauline employs 38 people which makes her a significant employer in Co Longford.

Richmount Cordial was also a runner up in this year’s Longford Enterprise Awards.

The business is run by husband and wife team David and Martina Burns.

David, a farmer by profession saw a niche in the market after specialising for years in the growing of sweet corn.

Martina, a retired teacher, had been making Elderflower Cordial for home use for many years, until 2013, when both she and David decided to take a leap of faith and plant their land with Elderflower saplings.

They then looked into the retail aspects for marketing the Cordial which is manufactured according to Martina’s home recipe and includes the freshest of Elderflowers with no artificial sweeteners or additives.

The window for picking Elderflowers is very short - just four to six weeks - so the Burns' have to plan carefully in order to maximise the flowers that are available to them.

The product is currently stocked in over 150 of Ireland’s leading speciality food stores and has been judged to be a far superior quality to any of its imported equivalents.

The couple’s passion shines through in both the quality of the product and in its marketing and branding.

The business operates from their farmhouse and plans are already in place to introduce more products onto the market in the near future.

Described as “A shining light for Longford”, this is the company that will represent Co Longford on the national stage at the local enterprise finals later this year.

It was a fortunate day for the county when in 2013, the directors of the company - Francesco and Charlotte - decided they liked the “rural tranquility” that this region had to offer and subsequently set about establishing their business in Longford town.

The company uses a system to analyse the energy trading market and provide cost effective, cloud-based solutions to energy companies involved in trading and risk management.

The mission is to allow organisations to fulfill their energy trade and risk management requirements to between 10% and 20% of their current expenditure level.

Ark Energy employs 10 people but initially faced challenges in attracting young people with the right skillset to it workforce.

To address the problem the directors of the company established concrete links with local colleges and as its reputation grew so too did its ability to attract young graduates on to its team.