longford get back on track 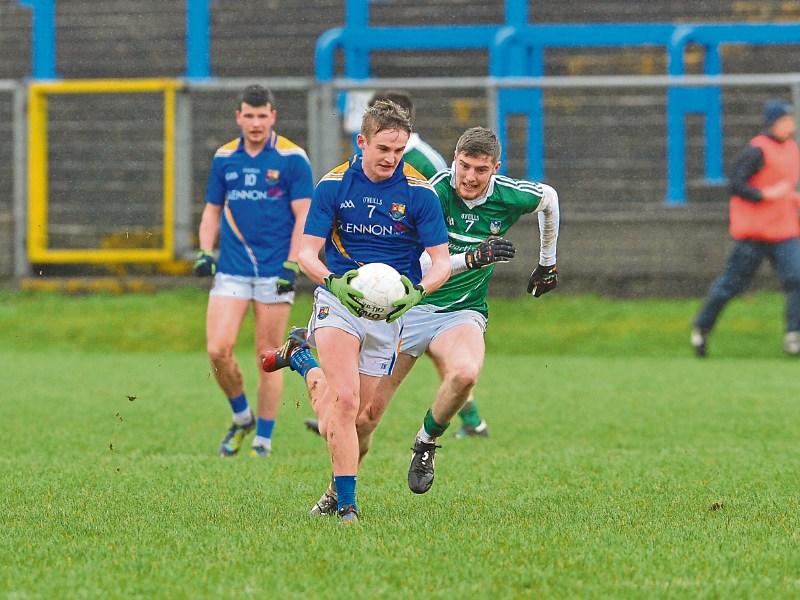 From the high of beating Dublin in the O’Byrne Cup to the low of losing to Offaly in Round 1 of the National League, Longford showed great character to get back on track with a vital victory over Limerick in extremely difficult conditions at Glennon Brothers Pearse Park on Sunday last.

With both sides badly hampered by the wind and rain that spoiled the Division 3 clash watched by a small attendance in the region of 300 who braved the bad weather on a terrible day, the battle for the league points developed into a real war of attrition due to the stamina sapping underfoot conditions.

And while Longford looked in big trouble when Limerick substitute Tom Lee scrambled the ball over the line for a goal midway through the second half to leave the visitors five points in front, 1-8 to 0-6, this proved to be a wake up call for the gutsy home side who eventually got their act together to stage a terrific comeback.

Already robbed of suspended captain Michael Quinn (the victim of a straight red card against Offaly the previous week), a further setback was suffered when Diarmuid Masterson (back on the team after serving a one match suspension carried over from last season) was dismissed after receiving a black card in the 46th minute.

Ian Ryan fired over the resulting free to put Limerick back in front and the visitors, showing the greater urgency, extended their advantage when Peter Nash shot over the bar in the 49th minute. Then came the Tom Lee goal, who appeared to be in the square when he finished a half-hit Nash shot to the net in the 52nd minute.

The pressure was firmly on Longford, who suffered from some harsh decisions made by referee James Molloy in the second half, but they proceeded to enjoy a new lease of life in dominating the final quarter of this gritty contest. The gap was gradually closed, with influential substitute Mark Hughes landing the first of seven points in a row with 53 minutes gone on the clock.

Liam Connerton then shot wide in a goal attempt and a brace of inspirational scores quickly followed from Barry McKeon and lively wing back Dessie Reynolds to give the entire team a great lift, led by the driving force of Dermot Brady in the centre of the defence and who was continually in the thick of the action throughout what was really a must win game for Longford.

Just a solitary point separated the sides when Brian Kavanagh converted a free in the 60th minute and the momentum was firmly with the home county, cheered on by their small band of loyal supporters.

A vital tackle by Barry Gilleran broke up a dangerous Limerick attack in the 65th minute and Longford launched an immediate counter-attack which yielded a superb equalising point from James McGivney who landed a shot from near the sideline.

Limerick were reeling on the ropes and they fell behind in the 69th minute when Brian Kavanagh kept his composure to land a long range free. Moments later Kavanagh was dismissed for a black card and when Robbie Smyth was sent-off for a similar offence in the second minute of stoppage time Longford were down to 14 players having used the maximum of six substitutes.

But the total of three black cards were not going to deny Denis Connerton’s side at this late stage and when another of the replacements, Brian Farrell, kicked the ball over the bar in the third additional minute the courageous comeback was complete.

In such a competitive league this was a very important result in the quest to consolidate the Division 3 status and relieved manager Connerton was delighted with the determined manner in which Longford battled back to come out on top in the finish.

The players can now enjoy a well deserved break from competitive action until the next league fixture at home to Kildare on Sunday February 28th after the gruelling schedule of seven games in the space of five weeks on the back of reaching the O’Byrne Cup final.

Collecting the first league points will be a considerable boost for the confidence factor and a couple of more wins will probably be good enough to keep Longford in Division 3.

That is the main target for Connerton and the other members of the management team and they will be pleased with the overall resolute team effort that was rewarded with a win over Limerick with the Munster men now looking like prime candidates for relegation.

However, it might have been a different story on Sunday last had the visitors not kicked a total of six wides after having the better of the exchanges in the first half. And Limerick could have snatched a goal when Gearoid Hegarty fisted the ball against the crossbar in his attempt for a point in the 15th minute.

The ball was almost deflected into the back of the net by a Longford defender but Limerick had a very lucky escape moments later when the clean through Robbie Smyth had the goals at his mercy but be blasted a rasping shot against the crossbar and the danger was cleared.

With just two wides in the first half, Longford were rather fortunate to be on level terms at the break (0-5 to 0-5) with three of the points coming from Brian Kavanagh (two frees). Francis McGee was proving to be a big threat in attack, kicking over the other two scores (both from play) with right-half-back Donal McElligott another player to figure prominently.

Ian Ryan (three frees), Danny Neville and Peter Nash accounted for the Limerick scores in the first half and after doing well to be drawing at half-time, Longford appeared to be in a good position with the advantage of the stiff wind on the changeover.

A bright start to the second half yielded the lead point from Liam Connerton with three minutes gone but Limerick continued to pose problems with a couple of goals attempts - the second of which was stopped on the line by Longford keeper Paddy Collum.

Limerick then stepped up another gear to land three points in a row through Ian Ryan (two frees) and Peter Nash and when the Tom Lee goal materialised Longford were left to fight a real uphill battle.

But they opened up to break free from the defensive gameplan from there until the finish and had to be a lot more adventurous in a more direct approach to rescue the situation in a great recovery that yielded those seven precious points and the eventual victory.