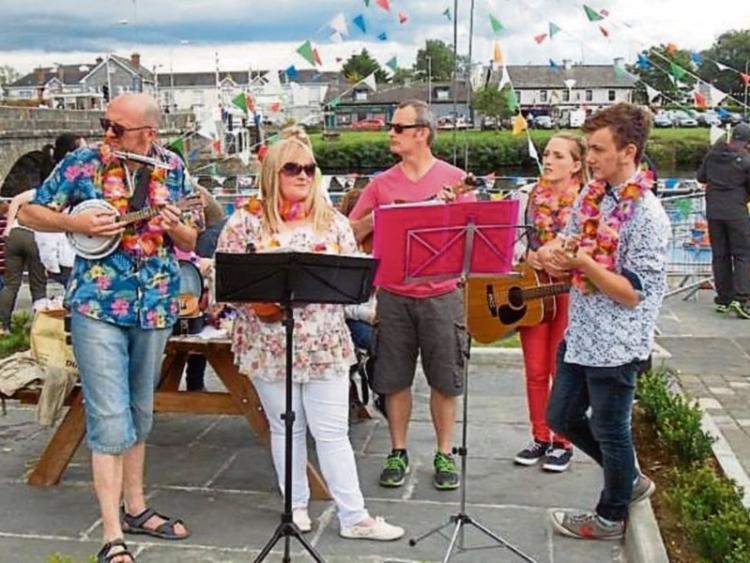 Though Longford is a small county, it boasts a multitude of talented musicians, not least the members of Longford Ukulele Group, which was founded in October 2014.

About five years ago, Sean Mulroy, co-founder of the group, got interested in the ukulele. Unfortunately, attempts to start up a group at the time proved fruitless, until he met Hillary O'Brien and the two of them set the ball rolling.

“We have a core group of about five people,” Sean continued, “and we meet on the second and fourth Mondays of every month.”

In their short time together, the group have already played a number of gigs outside of their meet-ups at the Tally Ho and even came joint first in the busking competition at last year’s Rooskey Heritage Festival.

Describing a typical meeting, Sean revealed that if they have a gig coming up, they will prepare a repertoire. Otherwise, they will share new pieces of music, play songs that they know or offer tips to each other. For most meet-ups, there will be a theme or a plan of action set out in advance.

“Egos are parked at the door - we play to the level of our weakest member,” he pointed out.

As to why they chose the ukulele, Sean claimed; “ask anyone who picks up a ukulele - they’re addictive”.

“There has been a huge upsurge in them in the last ten years.

“Santy brought my son a ukulele to keep his hands off daddy’s precious guitars,” he laughed. It was then that Sean’s interest in it grew - along with his collection of ukuleles!

Offering advice to anyone starting out with the ukulele, Sean suggested getting a few professional lessons to get started, but admitted that he had taught himself from YouTube videos.

With that said, he is still learning at each meeting, and he continued; “There is no such thing as someone who knows everything on an instrument.”

The Longford Ukulele Group meets every second and fourth Monday of the month in the Tally Ho, New Street, Longford town, and as Sean confirmed; “Absolutely all are welcome, even if you don’t play, as long as you sing, we don’t care!”

For more information, or to get in touch with the group, search for Longford Ukulele Group on Facebook.