Works set to begin this summer 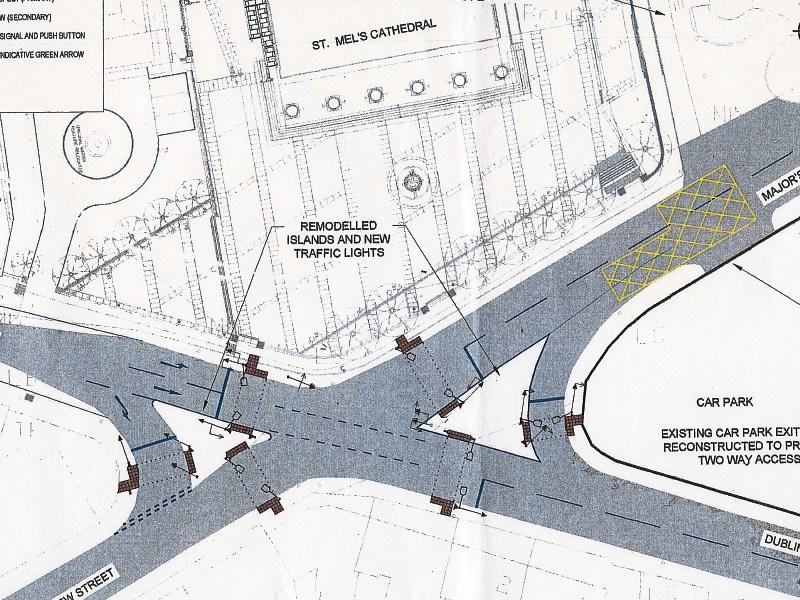 Work on alterations to the road junction at St Mel's Cathedral in Longford town is set to begin this summer after engineers unveiled the plans at last week's meeting of Longford Municipal District.

David Hurley of engineering firm Halcrow Barry told members that site investigations will commence next month and will be conducted at night “to minimise congestion.”

“The plan is to start this summer, post-Leaving Cert, and we're aiming to have it completed by September,” he continued, adding that in addition to a revised road layout, upgrades would include enhanced public lighting and new footpaths to make for a “coherent, understandable space for all road users”.

Among the changes to the road layout, vehicles will have a direct route through the junction from Major's Well Road to New Sreet, while access to the Cathedral car park will be solely from a reconstructed entrance/exit point on the Dublin Road. Existing pedestrian crossings will be removed and the entire junction will be controlled by traffic lights.

Municipal District Cathaoirleach Seamus Butler (FF) pointed out that 12 months had passed since Halcrow Barry had been appointed.

“Where did the time go?” he enquired.

In his reply, Mr Hurley said that, “we over-extended ourselves to test concerns that were raised. Unfortunately, this took time but we're confident we'll meet the [construction] window.”

Cllrs Mae Sexton (Ind), John Browne, and Peggy Nolan (both FG) voiced concerns over the lack of traffic lights at the nearby junction between St Mel's Road and Major's Well Road.

“I have misgivings about access from St Mel's Road: there will be a lot of emerging traffic and it will be virtually impossible to get access without lights,” Cllr Nolan claimed.

However, Mr Hurley said the plan had been “stress tested” and the junction was “deemed to operate better without lights”.

Asked to elaborate on what such a stress test involved by Cllr Sexton, Mr Hurley explained: “We viewed various flows of traffic and conducted counts for a full day, between the hours of 7am and 7pm.”

Cllr Browne further remarked on “the sharp turn onto Major's Well Road from the Dublin Road”. Mr Hurley conceded it was “a fair point, but shouldn't be an issue”.

Cllr Butler added: “I can see a lot of tyres mounting the kerb”.

The plan will now be brought forward for discussion at the February meeting of Longford County Council.