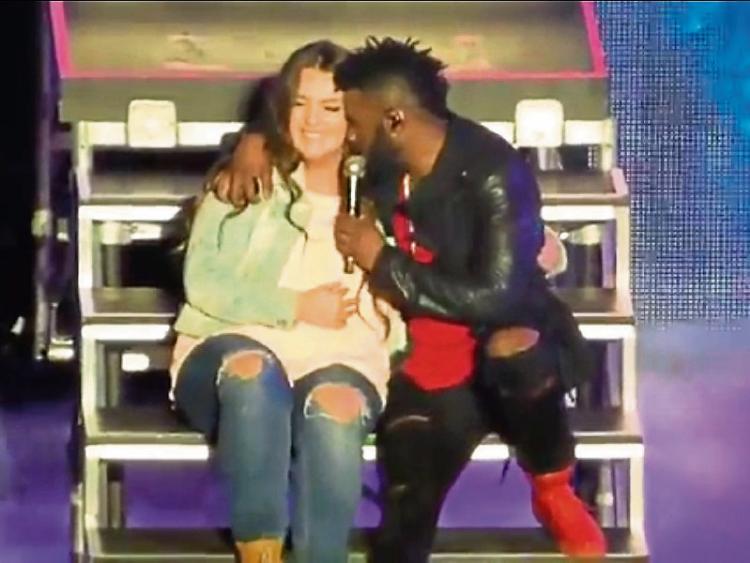 A lucky Longford teenager went from the Backstage Theatre stage to the 3Arena stage when she was serenaded by Jason Derulo at his Dublin concert last week.

Seventeen-year-old Niamh Sheahan, a daughter of Frances and Peter, Moydow, has been a Jason Derulo fan for more than six years and went to see the singer in concert for the first time on Tuesday, January 26, with her friend, Rachel Dillon.

“We got up really early on the bus so we were queueing outside for about two hours,” Niamh grinned. “Then we actually got to the barrier.”

She then explained how she and Rachel had jokingly vowed to take pictures for each other “on the off-chance” either one of them was called up on stage.

Little did she know that before too long, he would pick her to join him on stage as he performed his hit song ‘It Girl’.

“These two six foot five men had to lift me over the barrier and in doing so, they tore off the sole of my shoe,” she laughed.

“She was crying as much as I was,” exclaimed the Mercy Secondary School, Ballymahon, student.

Speaking to the Leader as she came off stage from her role as Prince Charming’s mammy in the BYT Panto ‘The Glass Slipper’, Niamh confirmed that her performance that night was scarier than being onstage in Dublin, and while she was at first apprehensive that other fans might be jealous, she was delighted by how happy they were for her.

“Everyone was so lovely, they were cheering me on, and afterwards people stopped me to get pictured with me!

“It was the best night of my life, undoubtedly,” she beamed.