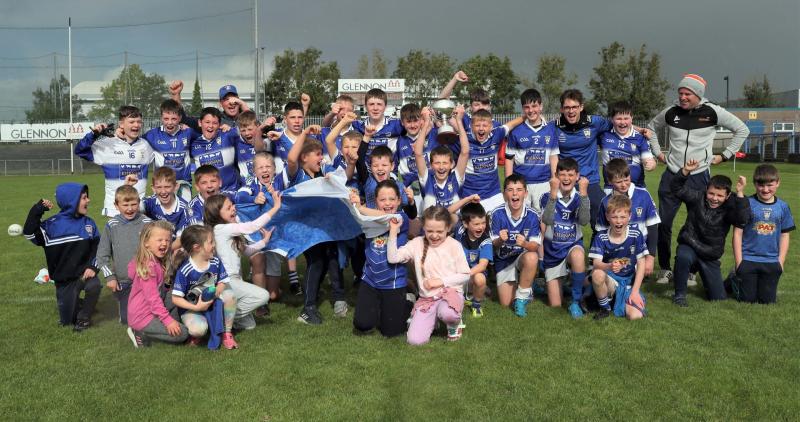 A terrific display from Granard saw them claim the inaugural U-13 ‘A’ Football Championship title after scoring a comprehensive win over St Vincent’s in the final at Glennon Brothers Pearse Park on Sunday last.

The competition replaces the U-14 championship with the Paddy Doris Cup still on offer for the winners. It’s the first time since 1995 that Granard won this trophy.

Under U-13 rules a goal is with only 2 points and points outside the ‘D’ are worth 2 points. Granard started slow and were five points down after three minutes but once they took the lead they never looked like relinquishing it.

St Vincent’s were excellent on their way to the final but came up against a strong Granard side. The Drumlish/Ballinamuck outfit were six points behind at the break but Granard were excellent in the second half.

It was very much a team performance from goalkeeper Aaron Walsh right up to corner-forward Conor O’Hara with subs Aaron Sheridan and Senan Neilon also playing their part in the success.

St Vincent’s made a great start with a two pointer from Shane Hannify in the first minute. Darragh Connelly followed up with a point before Donnacha McKeon found the back of the net with a fine finish.

The impressive Brendan Martin opened Granard’s scoring in the third minute. They then kicked a number of wides before two pointers from Martin and Patrick Kelly gave Granard the lead for the first time in the 16th minute.

Conor O’Hara got his first two pointer minutes later before Daniel Corr scored a goal with a stunning lob in the 25th minute. St Vincent’s got a much needed point from substitute Cian Lawlor in the 28th minute but a free from Brendan Martin just before the break left the score at 0-12 to 0-6 in favour of Granard.

Martin was on target again from a free in the second minute of the second half to extend Granard’s lead. He then received a fine pass from Conor O’Hara minutes later to put 10 between the sides.

St Vincent’s  tried to get scores but were thwarted by a resolute Granard defence and a solid netminder in Aaron Walsh. The lead was 13 points in the 43rd minute as Granard began making their possession count on the scoreboard.

Darragh Connelly got St Vincent’s first and only score of the second half in the 49th minute. They couldn’t add  to their tally despite having a few chances. Like Granard they kicked some wides with the strong wind playing its part.

Brendan Martin and Conor O’Hara kept the scoreboard ticking over for Granard as they scored a number of great 2 pointers. Martin was also accurate from frees. Daniel Corr was involved in a number of scores too.

As the game entered the closing minutes Granard were ahead 28 points to 8 but they didn’t give up on the scoring with Conor O’Hara firing over the final 2 pointers in this great win.