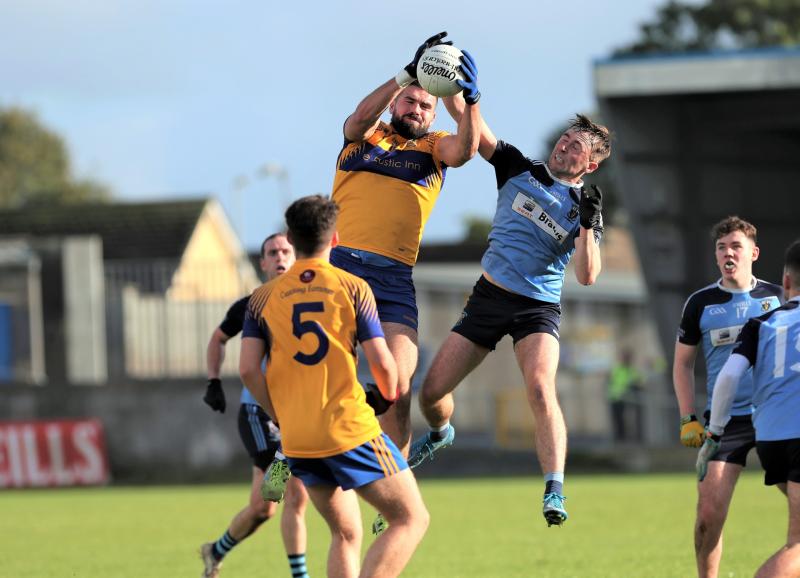 David Shannon winning the ball for Carrickedmond in this tussle with Slashers opponent Gerard Flynn. Action from the SFC Round 5 game Photo: Syl Healy

Building on a great start in establishing a 1-3 to 0-0 lead in a storming first quarter display, gutsy Carrickedmond stuck it out to spring a surprise in knocking Longford Slashers out of the 2021 Senior Football Championship.

Defender Michael Cahill capitalised on a bad mistake to score the decisive only goal with nine minutes gone on the clock in the crucial Group A final round game at Glennon Brothers Pearse Park on Sunday evening.

Slashers gradually battled back to close the gap and were on level terms (0-10 to 1-7) when Gerard Flynn shot over the bar in the 47th minute and looked like surviving.

But resolute Carrickedmond (overcoming the setback of a black card for Sean Kelly midway through the second half) were in no mood to let the game slip from their grasp and scored three more points in the final quarter to clinch a deserved victory.

The reward for Stephen Coy’s side is a quarter-final meeting against Mullinalaghta while Slashers are pitched into the relegation play-offs and a clash against Clonguish.

With Colmcille already qualified for the quarter-finals and Fr Manning Gaels in the relegation play-offs, there was little at stake in the other Group A final round game at the Dromard grounds on Sunday evening. Eugene McCormack’s side were in complete control in cruising to a very easy 3-16 to 0-8 win.