Longford SFC: Dromard through to the quarter-finals as Rathcline lose out 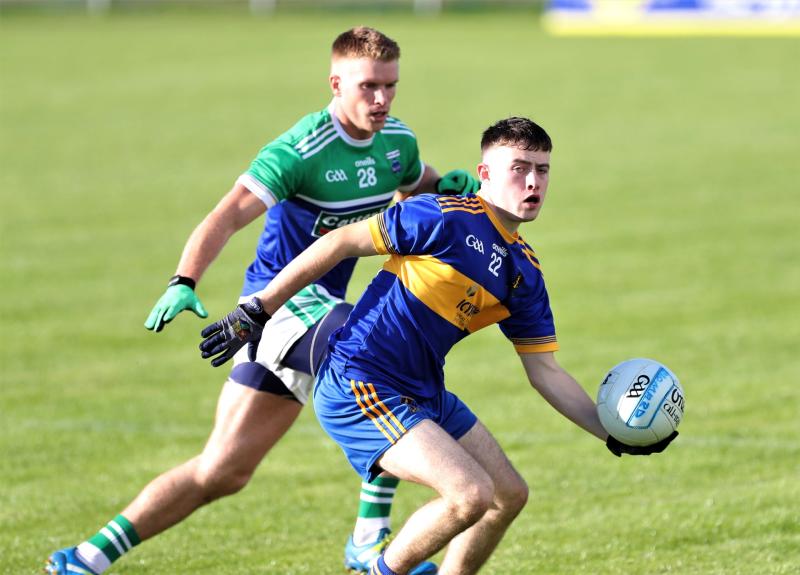 Aaron Farrell on the ball for Dromard ahead of Rathcline defender Shane Donohoe. Action from the SFC Group B final round game Photo: Syl Healy

Dromard are through to the Senior Football Championship quarter-finals after scoring a comfortable win over Rathcline in the make or break Group B Round 5 game at Glennon Brothers Pearse Park on Saturday evening.

Boosted by a brilliant start which yielded a goal from Francis McGee in the opening minute, Dromard were dominant for most of the first half to establish a commanding 3-5 to 0-6 lead at the break with Aaron Farrell and Conor McGahern also finding the back of the net.

Rathcline were in a position to reach the last eight had they succeeded in winning this crunch clash but whatever hopes they had of staging a dramatic comeback on the changeover were well and truly dashed when Joseph Hagan fired home the fourth goal for Dromard in the early stages of the second half.

After receiving a black card in the latter part of the first half, Diarmuid Masterson was sent-off  after he was branded with a yellow card in the 41st minute but 14-man Dromard were never in any danger of letting a well deserved victory slip from their grasp despite the numerical disadvantage

The learning curve continues for Rathcline who were guilty of making numerous mistakes and are now facing into the relegation play-offs in the battle to retain their senior status.

While there was little emphasis on the other two Group B final round fixtures on Saturday evening with three of the four teams involved already qualified for the Senior Football Championship quarter-finals, unbeaten Mullinalaghta finished top of the table after scoring a comprehensive 1-15 to 0-5 win over St Mary’s Granard at Moran Park.

Abbeylara had a couple of points to spare (1-12 to 1-10) over Clonguish at Emmet Park to finish second in the table and it is more bad news for the Newtownforbes outfit who failed to win a game in the group stage of the 2021 SFC as they prepare for a relegation battle.

Longford SFC Group B - Round 5 Results

Mullinalaghta, Abbeylara, Granard and Dromard qualify for the quarter-finals while Rathcline and Clonguish end up in the relegation play-offs