Longford SFC: Damage done in the first half as Killoe cruise to emphatic win over Carrickedmond 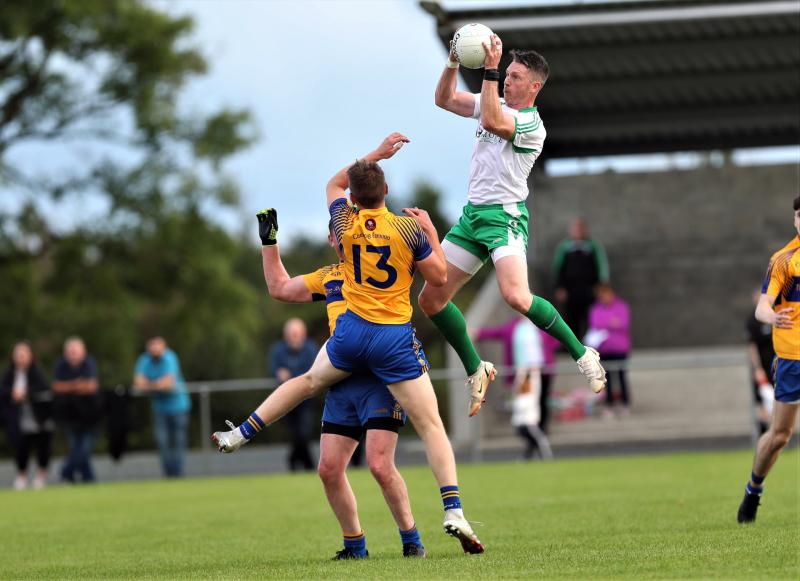 Michael Quinn rising high to win the ball for Killoe against Carrickedmond. Action from the SFC Round 4 game at Keenan Park Photo: Syl Healy

The damage was done in the first half as the title holders Killoe cruised to an emphatic win over Carrickedmond in the Senior Football Championship Group A Round 4 clash at Keenan Park, Ardagh on Saturday evening.

It was all over as a contest at the first water break as Emmet Og ran riot in the opening quarter to build up a runaway 2-9 to 0-1 lead.

Goals from the usual suspects Mark Hughes and Larry Moran allied to impressive performances from county stars Michael Quinn and Daniel Mimnagh crushed the challenge of Carrickedmond who trailed by 2-12 to 1-3 at the break.

Carrick, to their credit, were much improved during the remainder of the match to outscore Killoe 1-8 to 0-9 with David Shannon scoring the goal to continue his fine form in the 2021 championship.

It will all come down to the final group fixture next weekend when Carrickedmond face Longford Slashers to determine who will qualify for the quarter-finals.