Longford champions again: Killoe manager Tommy Donohoe full of admiration for what his players have achieved 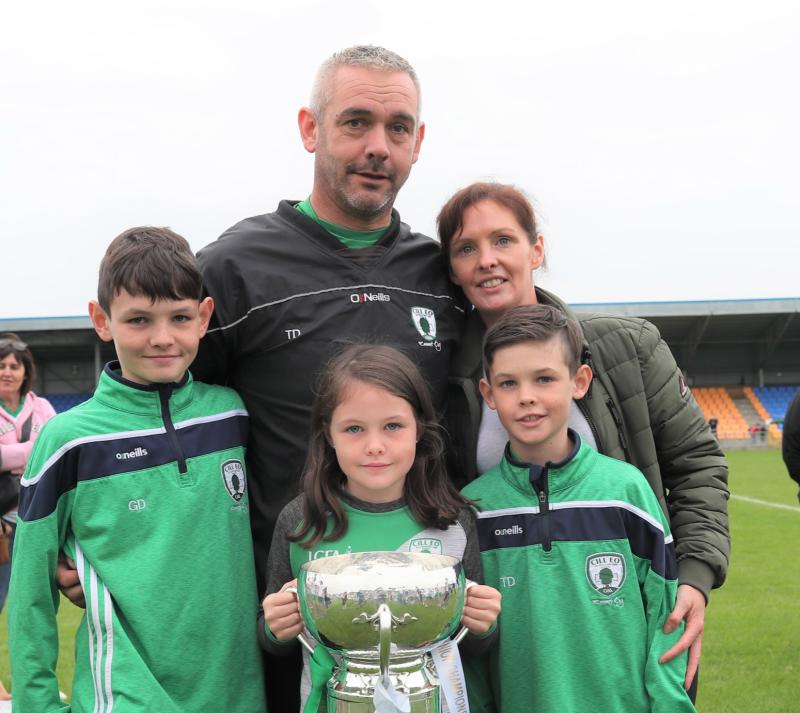 Killoe manager Tommy Donohoe pictured with his wife Marguerite and children Gavin, Mia and Tom with the Connolly Cup following the win over Slashers in the 2020 SFC Final Pic: Syl Healy

Killoe manager Tommy Donohoe spoke of his admiration for his players after they claimed back-to-back senior championship titles on Sunday. It was the second time in the club’s history that they’ve achieved that fine feat.

Donohoe said: “It is something special. These are an exceptional group of lads. And maybe as a management team we underestimate them a little bit. The age profile probably averages 22. We have a nice blend of experienced players too.

At times in the first half the game was cagey but it opened up after the break. Donohoe admitted it was a typical county final.

He said: “You play a bit on the edge; it’s that fear of losing. You are just trying to hold onto it until the final whistle. Maybe afraid to push forward. We would have taken a one point win. Slashers v Killoe; there is only a kick of a ball between them and always will be.”

Killoe defender Liam Hughes was immense on Sunday but received a black card in the second half for a foul on Darragh O’Connell. The Emmet Og manager was full of praise for the defender.

He said: “Wrecker is brilliant. He’ll go out there and do a job; no matter who you put him on. That’s the attitude of all the players though. They all know they have a role to play.”

During the 10 minutes that Killoe were down to 14 men, Slashers got back on level terms but Donohoe’s men didn’t panic. They were cool and calm.

The Killoe boss said: “There are lads out there who have won five championship medals. They have been in situations before where they have to see out a game.

“We always thought about keeping the scoreboard ticking over and that’s what it’s about. We didn’t need to go for any big scores at that stage. That’s the way we looked at it.”

Despite Killoe not having too much time to enjoy their success Donohoe admitted all that matters is that they are champions. He admitted the 2021 championship will be a huge challenge for his side with 3-in-a-row at stake.

“At the end of the day it goes down that we won the Championship in 2020. It’s Killoe’s 13th title. We will get back at it this weekend and will put in a massive challenge for the three-in-a-row.”

For Donohoe and Killoe the focus is very much on Fr Manning Gaels on Saturday evening in the opening game of the 2021 championship. Donohoe knows clubs will be out to topple his side.

“The way we’ve been taking it is every game as it comes. We will enjoy the buzz of winning the 2020 title. There is no point winning championships or games if you don’t enjoy them. That’s the purpose of sport. We are there now to be knocked off our pedestal.”