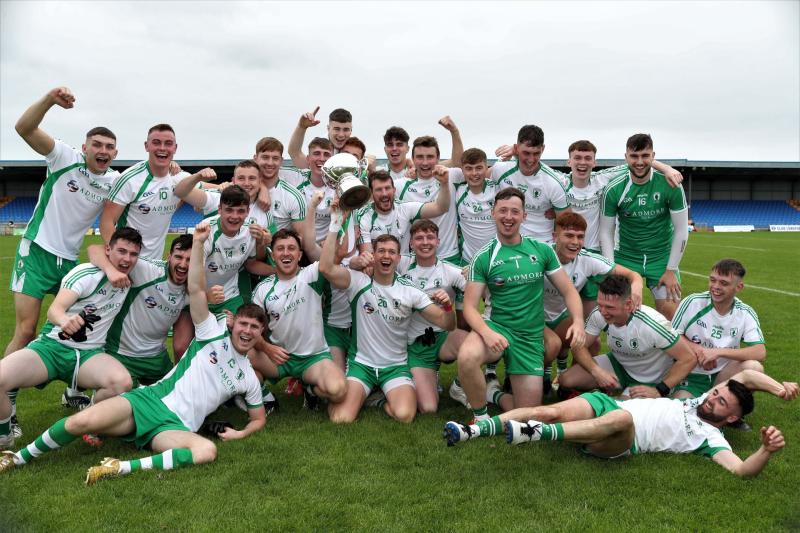 The jubilant Killoe squad celebrating with the Connolly Cup after winning the 2020 SFC final on Sunday last Photo: Syl Healy

Killoe were crowned the county senior football champions for the 13th time when they produced a strong finish to beat Longford Slashers in the Covid delayed 2020 final at Glennon Brothers Pearse Park on Sunday last.

The narrow margin of just two points separated the sides in the finish as Emmet Og completed back-to-back triumphs and it was their greater scoring power that proved to be a decisive factor as Tommy Donohoe’s charges retained the coveted Connolly Cup.

Slashers also had to settle for second best against Killoe in the 2019 final and the sky-blues were left to rue some poor finishing which accounted for eight costly wides in the second half as they lacked a cutting edge in attack.

Having said that, Emmet Og (who led by 0-8 to 0-5 at the break) also squandered a number of chances throughout the game   and failed to convert three goal chances on the changeover.

Killoe showed a lot of character to overcome the handicap of losing rock solid  defender Liam Hughes to a black card in the 43rd minute.

Hughes was dismissed for a ten minute period in fouling Darragh O’Connell for a Slashers penalty which was duly dispatched to the corner of the net by Andrew Kelly.

And with the extra man advantage they got back on level terms (1-7 to 0-10) when Barry Gilleran fisted the ball over the bar in the 51st minute.

Killoe came storming back to score a couple of cracking points through Ryan Moffatt and Larry Moran and clinched another senior championship success when Moran fired over a free in the sixth minute of stoppage time.

There was one last chance for Slashers when they were awarded a free but goalkeeper Colm Farrell blasted the ball over the bar in his attempt to snatch a last gasp equalising goal.

It was a deserved victory for Emmet Og with their  so influential  centre-half-back Michael Quinn winning the man of the match award.

Inspirational full-back Liam Hughes must have been a very close contender for that particular honour while the sharp Killoe full-forward-line of Larry Moran, Mark Hughes and Ronan McGoldrick also made a big impact for the undisputed kings of the county

The slick attacking trio accounted for all but two points of Killoe’s winning tally with eight of those scores coming from play.

Slashers, on the other hand, managed just three points from play as their forward division failed to capitalise on the powerful performances of Daire O’Brien and Tadhg McNevin who won the midfield battle.

Killoe (minus the injured Cian Farrelly) got off to the perfect start with a fine point under pressure from Ronan McGoldrick in the opening minute before Andrew Kelly was on the mark for Slashers when he fired over a free in the 4th minute.

The reigning champions then moved into a 0-3 to 0-1 lead with a brace of scores from Mark Hughes (free and mark) before Gerard Flynn went on a penetrating run to create the chance of a goal for Slashers but he shot wide.

McGoldrick fired over another couple of points for Killoe (the second of which was a terrific strike) while Andrew Kelly (free) and Darragh O’Connell were on target for Slashers before Mark Hughes (free) landed his third score in the 26th minute.

A shot from Robbie O’Connell then hit the upright in another Slashers attack not long after Ronan Sheahan made a vital interception at the other end of the pitch to stop a goal opportunity for Killoe.

When Larry Moran converted a free in the 29th minute to extend the lead to four points, Slashers looked in some trouble but they managed to keep in contention thanks to a couple of points from frees converted by Andrew Kelly and Robbie O’Connell in first half stoppage time.

Killoe also added to their tally when Larry Moran shot over the bar to leave his side three points in front at the break but Slashers made a great start to the second half when Daire O’Brien burst his way through for a brilliant point.

Back came Emmet Og with James Moran blowing a great chance of a goal when he blasted the ball wide but in an immediate counter-attack the sheer power of Michael Quinn saw him surge forward to set up another point for Mark Hughes with three minutes gone on the changeover.

A cracking score from Eamon Keogh in the 39th minute left Slashers trailing by 0-10 to 0-6 but they were thrown a lifeline when a slick move involving the hard working pair of Peter Lynn and Gerard Flynn ended up with Flynn playing a marvellous ball into the path of Darragh O’Connell in front of the posts.

The Killoe defence was split wide open and with O’Connell looking all set to score a goal he was impeded in the square by Liam Hughes and a penalty was awarded.

Andrew Kelly drove the ball into the back of the net, despite a close saving attempt by the opposing keeper Shane Fitzpatrick, and the gap was closed to just a single point.

With numerical advantage after the black card for Hughes, this was a great chance for Slashers but the best they could do during the sin bin period was a point from Barry Gilleran.

Although down to 14 players, Killoe went close to scoring a goal in the 48th minute when Larry Moran had a point-blank shot blocked down and cleared off the line.

And in another lucky escape for Slashers a shot from Emmet Og substitute Ciaran Donohoe in his attempt to find the back of the net from a tight angle was deflected narrowly wide in the 52nd minute.

Killoe regained the lead in the 54th minute when Ryan Moffatt surged forward to fist the ball over the bar and with Liam Hughes back on the pitch, the force was firmly with the title holders as an equally excellent score followed from Larry Moran in the 59th minute.

A point apiece from frees followed deep into stoppage time and Slashers were left to wonder what might have been had they succeeded in posing a greater threat in a score shy attack.