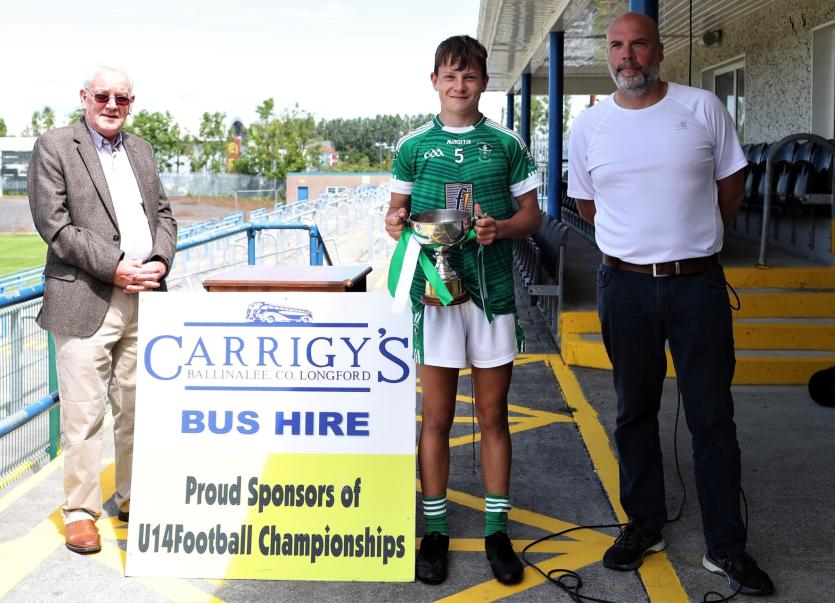 Clonguish Og were unstoppable in their big win over Killoe Óg in the Covid delayed 2020 Under 14 ‘A’ Football Championship Final at Glennon Brothers Pearse Park on Sunday morning last to capture the Paddy Doris Cup in tremendous fashion.

The weather and conditions were perfect for the title decider but Killoe Og, missing a number of regulars, were outclassed by the impressive Clonguish Óg side.

The Newtownforbes outfit played a range of football more akin to senior inter-county football than U-14 football as they attacked and defended in numbers.

The team management of Kieran Carey, Enda McKeon, Damian Dorr and Terry Flynn adopted the basketball style of football which is sweeping our county game in this encounter and Killoe were no match for the well drilled boys in green.

Clonguish got numbers back in defence sharply, tackling furiously and breaking away in similar fashion. This style of football has not yet swept the underage game but with powerful performances like this, Clonguish will become the trendsetters.

Cormac Flynn was outstanding for the winners in scoring a very impressive total of 2-9 while  Daniel Carey at centre-half-forward was also fantastic in his clever link up play and work rate.

Shane Donohoe impressed in his efforts for Killoe in a fine performance in midfield, kicking Killoe’s only score in the first half. Clonguish outscored their neighbours 11 points to 1 to hold a commanding lead at the break.

7 of the 11 scores came from the boot of the deadly Cormac Flynn while Daniel Carey and James Flynn also scored fine points. Proof of Clonguish’s impressive attacking formation was truly illustrated when corner back Joshua Marsh and wing back Kevin Baskett both got their names on the scoresheet in the first half.

A class Robert Smith point and a fantastic goal from Alan Mimnagh in the second half ensured the whole half-back-line contributed to the final Clonguish tally.

While Clonguish impressed with their brilliant point taking in their scintillating first half performance, the ruthlessness of their attack shone through in the second half as they hit Killoe for 7 goals.

The marksmen in the goal rush were Daniel Carey, James Flynn, substitute Cathal Lynch, a fortuitous lobbed effort from midfielder Jamie Dorr and 2 from Cormac Flynn all added to the Killoe misery.

Killoe did get a couple of consecutive consolation scores from midfielder Zach Fitzpatrick and wing forward Enda Quinn late on but their tired-less work ethic could not truly be reflected on the scoreboard as Clonguish ran out comprehensive winners to claim the 2020 U-14 ‘A’ championship title.