Remaining fixture in Division 3 North away to Fermanagh this Saturday 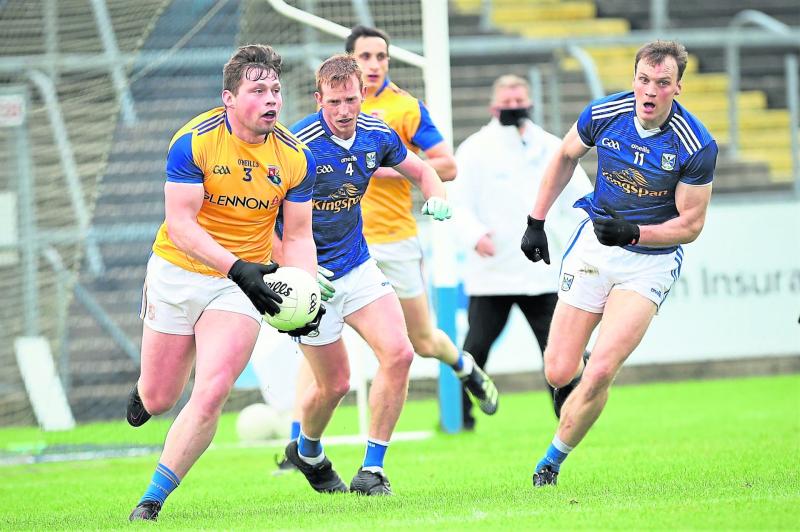 Badly wounded after suffering a shattering heavy defeat against Derry in the opening round the previous week, Longford improved considerably against Cavan in the National Football League Division 3 North clash at Kingspan Breffni but it was not good enough to stop the Ulster champions.

While spirited Longford gave it their best shot at the eerily empty grounds (Covid restricted game behind closed doors) on Saturday evening last and were just a couple of points behind at the break (1-9 to 0-10), Cavan called on all the valuable experience gained in operating at a higher level in the recent past to assert their superiority in the second half.

Despite losing key players James Smith and Ciaran Brady who were forced to retire injured on the changeover, Mickey Graham’s side still had enough in reserve to come out on top with the substitutes introduced making the desired impact.

In the end, Cavan emerged victorious by the comfortable margin of six points despite conceding a late goal and playing the last nine minutes of the match with 14 men after Patrick Lynch was branded with a black card.

The home county were seven points in front (1-16 to 0-12) and in cruise control when Longford were thrown a lifeline with a goal from a penalty converted by Darren Gallagher for Lynch's  foul on Dessie Reynolds who was trying to work his way through for a goal chance in the 71st minute.

Cavan refused to panic despite the numerical disadvantage during the lengthy ten minutes of stoppage time, seven of which materialised after James Smith was eventually stretchered off after sustaining a nasty fall direct from the throw-in at the start of the second half.

All Longford could manage during the remainder of the match was a point from a mark converted by substitute Barry McKeon.

Cavan, on the other hand, kept their composure to shoot three scores courtesy of a couple of cracking frees fired over by All-Star goalkeeper Raymond Galligan with influential substitute Conor Smith (play) also on target.

Longford are now facing a relegation play-off against one of the bottom two teams in the southern section, regardless of what happens in their remaining Division 3 North fixture against Fermanagh in Enniskillen this Saturday (3pm).

Starting without Kevin Diffley (injured) and Oran Kenny, manager Padraic Davis can take some positives from the performance against Cavan in the belief that his side could be good enough to win at Brewster Park and give the players a confidence boost in the bid to avoid the dreaded drop into Division 4.

Longford got off to a great start against Cavan with points from Darren Gallagher (free) along with a well struck brace from Rian Brady (play) but from the moment Gearoid McKiernan burst his way through to score a cracking goal midway through the first half the force was with Cavan.

That decisive score in the 17th minute, just before the first water break, left the Breffni blues leading by 1-3 to 0-3 with their points coming from McKiernan, Martin Reilly and Patrick Lynch (free).

Cavan extended their advantage with further scores from Oisin Kiernan, Caoimhan McGovern and Conor Brady before Longford awoke from their slumber to close the gap in determined fashion.

A fine individual score from Iarla O’Sullivan, after he set off on a penetrating run through the Cavan defence, was followed by a well-taken point from the boot of Joseph Hagan.

Then a good chance of a Longford goal was squandered in the 25th minute when the ball did not break kindly for Darragh Gallagher in front of the posts before another Cavan attack yielded a point from prominent centre-half-back Oisin Kiernan.

Longford continued to surge forward with a lot of pace and the reward was two excellent points from Joseph Hagan and Liam Connerton before a claim for a penalty in line with the new rule was ignored by referee Cormac Reilly.

Connerton was clearly pulled down on the path to a possible goal but there was no black card for the Cavan opponent as Longford had to settle for a free which was duly converted by the captain Darren Gallagher.

Back came Cavan with a terrific point from the outstanding Arva defender Ciaran Brady as the first half entered into stoppage time but Longford were relentless in their pursuit of a positive result as Daniel Mimnagh and Robbie Smyth fired over fine scores.

That left just the minimum of margins separating the sides but just before the half-time whistle Oisin Pierson slotted over a free to leave Cavan leading by 1-9 to 0-10 at the break.

The fact that the rain started to fall in the second half was a negative for the lighter Longford side and Cavan used their superior physical strength to really stamp their authority on the game.

The encouraging first half display was as good as it got for brave Longford and all they could manage on the changeover was a further 1-3, none of which came from play.

And Mickey Graham’s men might have scored a second goal but for a tame effort from Pierson who shot straight at the Longford keeper Paddy Collum in the 46th minute.