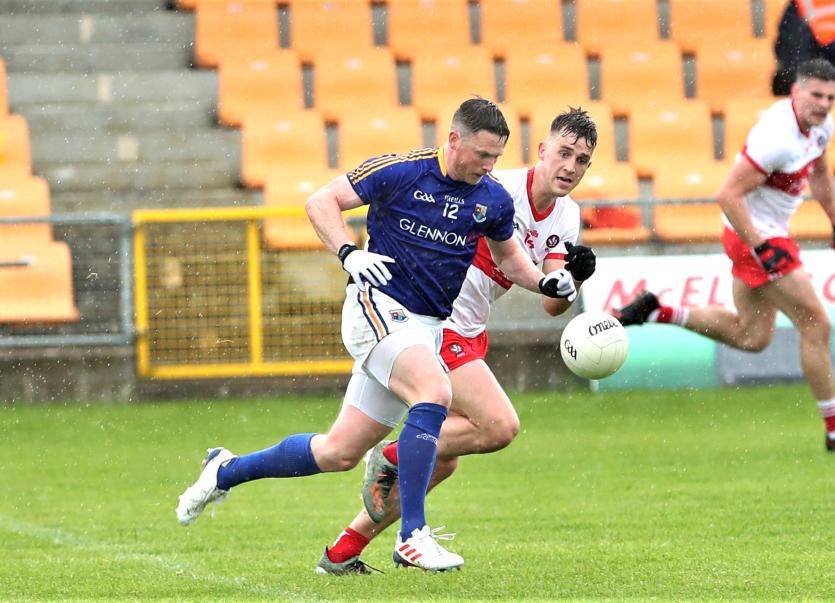 For Killoe’s Michael Quinn his break from inter-county football at the end of 2020 seemed like a lifetime but in fact it was just three games.

“I only missed three games last year; one in the league and two in the championship. And we ended up winning the O’Byrne Cup in the same season.

“My students said “have you retired?” but I said it was just a hiatus.” You feel like you’re gone for so long,” commented the St Mel’s College PE teacher.

Due to Covid and the impending birth of his baby (Alice arrived in October), Quinn decided to take a break from the county but is happy to be back again in the blue and gold.

He said: “You are glad to be back in around the set-up. Busier times but you appreciate your time more. You kind of want to make the most of it; whether that’s at training or games. You can enjoy that.

“Saturday against Derry wasn’t one of those enjoyable times. It’s trying to learn from that.That we can improve and work on things going forward.”

It wasn’t the welcome return Quinn had hoped for on Saturday; a 16 point defeat to an impressive Derry side at Glennon Brothers Pearse Park.

Division 3 North is a tough group for Longford with the two relegated teams from Division 2, Ulster Champions Cavan along with Fermanagh, and the team that finished third in Division 3 last year.

After Saturday’s setback Longford can’t afford any more slip-ups. Quinn said: “We are going to have to be realistic about it. We are fighting an uphill battle at the moment.

“Let’s build on things from Derry, let’s not get caught up on the result. Start at where we need to improve and get more scores on the board. How do we go about that?”

Next up for Longford is a trip to Kingspan Breffni Park to take on Cavan on Saturday evening (7pm). It’s a derby game with both sides wanting to bounce back from defeats last weekend.

“Any lad that is a county player or in that position; they don’t need to be motivated after a loss like that.

“There is usually a kick and hopefully we can kick-on this weekend. At the end of the day we are playing a team that has won an Ulster Championship.

“After getting a clip from Fermanagh there is going to be a kick from  Cavan  too. We have to be smart. The joy with the league at the moment is there is no time to dwell on it,” stated Michael.

Quinn is only too well aware of the threat that Cavan will pose.

They have great quality and there will be intriguing battles  all over the field.

“Lads with All-Stars awards and Ulster medals. That’s motivation enough for a lot of lads; north Longford lads and the presence of Mickey Graham in the opposing camp.”

“We got to play Cavan a few years ago where Cavan, Longford and Roscommon were on a par, see where they’ve gone since,” concluded Quinn.