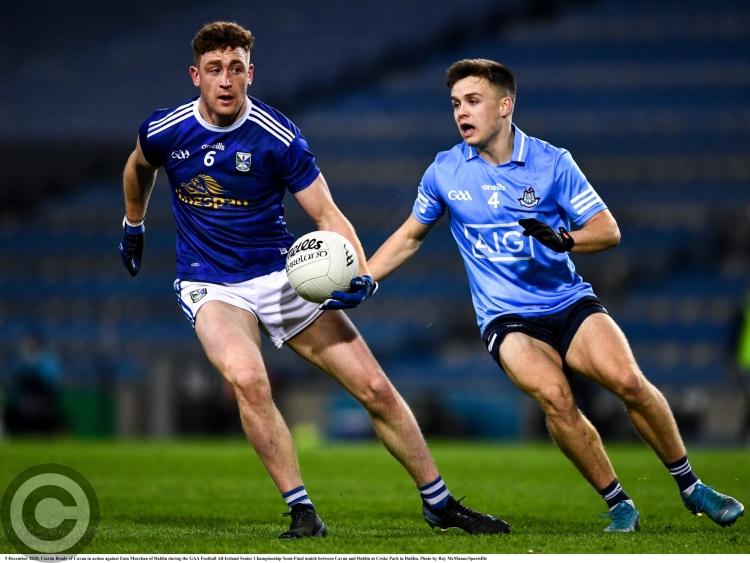 Arva's Ciaran Brady on the ball for Cavan in evading the challenge of Dublin opponent Eoin Murchan. Action from the All-Ireland SFC semi-final at Croke Park Photo: Ray McManus/Sportsfile

In the end it wasn’t to be for a gallant Cavan side in bowing out at the All-Ireland semi-final stage as Dublin’s quest for a magnificent 6-in-a-row is now just one step away.

Cavan kept in touch with Dublin for much of the first half at Croke Park on Saturday evening but as time ticked by Dublin were able to up their game, without really clicking into top gear, and were different class.

The Ulster champions ended the game with 14 players after Thomas Galligan received a second yellow card in the closing stages of the semi-final clash.

For much of the game Cavan had done so well to keep their goal intact but in the 65th minute the Dubs finally raised the green flag with Robbie McDaid palming the ball to the net.

Cavan took the game to Dublin and straight from the throw-in they got their opening score; James Smith winning possession and Martin Reilly shooting over the bar. Ciaran Kilkenny replied for Dublin before James Smith edged Cavan back in front again with an excellent point.

Points from Brian Fenton and Robbie McDaid gave Dublin the lead for the first time on six minutes but from their third shot at the posts, Cavan got their third point through Thomas Galligan.

Cavan were direct and accurate in the early stages but Dublin slowly began to get on top. Con O’Callaghan and Dean Rock gave them a two point lead on 10 minutes. Two more points from the boot of Rock (one free) gave Dublin a four point lead on 16 minutes.

After going 10 minutes without a score, Cavan got a much needed score on 17 minute when half-back Ciaran Brady got up to fire the ball over the bar. Dublin replied with points from Fenton and Rock (free) while on 22 minutes Gearoid McKiernan fired over a pointed free for Cavan in what was an entertaining contest.

The lead was five on 27 minutes. Dublin’s Jonny Cooper was lucky not to have been shown a black card for a foul on Martin Reilly on 29 minutes and Chris Conroy converted the resulting free.

Cavan made a number of mistakes which the Dubs punished. On 30 minutes Niall Scully slipped as he took a shot and Cavan netminder Raymond Galligan was able to save. Dublin were six ahead in first half stoppage time but a point from Óisín Kiernan just before the break saw Cavan trail by 0-12 to 0-7.

Dublin made a great start to the second half, kicking over three early points to extend the lead to eight points. Conor Madden got a much needed point for Cavan on 43 minutes with an excellent score but Dublin replied with another three as Con O’Callaghan raised his game in the second half.

The lead was 12 on 57 minutes but credit to Cavan they didn’t give up and hit over three points in a row through Martin Reilly, Óisín Kiernan and James Smith.

Dublin replied to those scores with McDaid’s goal from a Ciaran Kilkenny delivery and then added points through Fenton, Rock (free) and substitute Cormac Costello to run out emphatic winners.