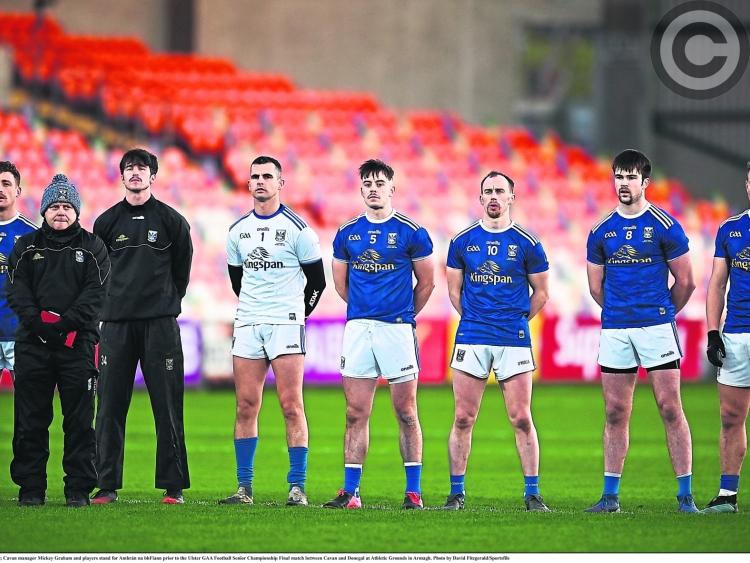 Two years ago Mickey Graham was preparing for a Leinster Senior Club Championship final as Mullinalagha manager, now he is getting ready for an All-Ireland Senior Football semi-final with his native Cavan; their first since 1997.

It’s something Graham never envisaged: “Things like that don’t happen too often. They’re things that you dream of and hope that they happen. You hope someday that you would do it but to do it in such a short space of time.

“But I’ve been very lucky to work with great players along the way. I had great players in Mullinalaghta and great support there. The committee, right down to the backroom team with John (Denning), Paddy Brady, John Keegan Snr.

“It’s the same in Cavan. I’ve a great backroom staff and the players compliment it. You need to create an environment where everyone is singing off the same hymn sheet.”

Dublin provide the opposition for Cavan on Saturday and Graham is under no illusion about the challenge that lies ahead.

“You are coming up against the greatest team of all time. They have set the standard for the last 10 years and it’s up to everybody to get up to that standard. They are an exceptional team with an exceptional bunch of players. It’s a huge game for us. It’s going to show where we are at, and where we need to get to.”

The Cavan manager has much respect for a Dublin side going for a remarkable 6 All-Ireland SFC titles in a row. They recently won their 10th Leinster title in a row.

Graham said: “They are so professional and so comfortable in every situation they are in. They are so experienced. It’s very hard to keep that hunger going especially when they are so successful. That is a hard thing to do.”

At the end of October Cavan suffered relegation to Division 3. Although disappointed with that, for Graham and the Cavan players the focus was on their opening Ulster championship game against neighbours Monaghan.

“As a player, it’s always about the Ulster Championship. It’s the holy grail for teams especially Cavan who had a good tradition in it.

“The league is good and it gives you an opportunity to look at players and give them game time.

“Cavan’s record in the Ulster Championship had been poor in the recent past and it was something that we looked at and wanted to do better in it. We took it one game at a time.”

Beaten by Donegal in last year’s provincial final, Cavan were the comeback kings in Ulster this year. Graham was in similar situations when manager of Mullinalaghta and one thing he instilled in his players was not to panic.

“The secret is not to panic. You are going to get chances and when they come you’ll have to be ready to take them. That’s the bottom line. It’s about waiting and hanging in there.

“It’s something that I firmly believe in as a manager; you are going to get bumps in the game and all of a sudden you get an opportunity and you could be back in contention. Grab those opportunities with both hands,” he said.

Graham has only played in Croke Park once as a player; he came on as a sub in 1997. It will be strange for him and Cavan playing in an empty Croke Park.

“Any other time and the fanatical Cavan supporters would have been there in huge numbers. The affable Cavan boss is delighted he’ll have no phone calls looking for tickets this week.

“That’s the one good thing about the whole thing,” he said jokingly. “It wouldn’t have been hard to fill Croke Park this weekend.”