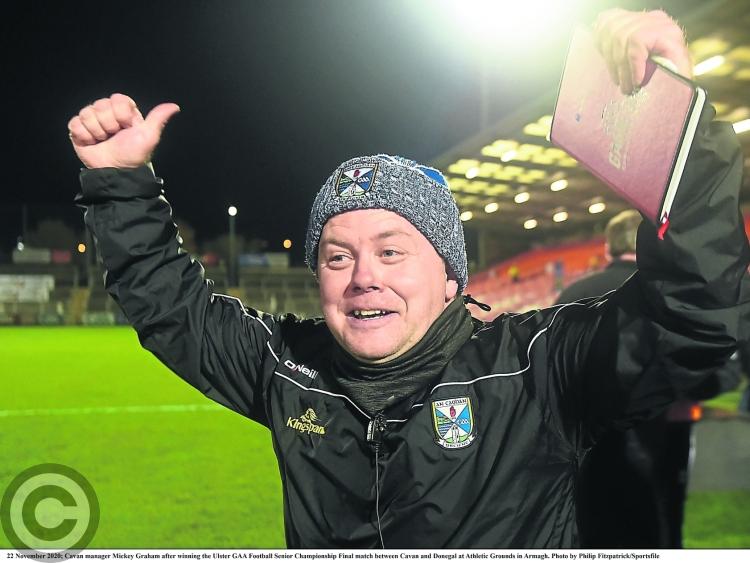 Master tactician Mickey Graham worked a miracle with Mullinalaghta when he managed the  three-in-a-row Longford champions to a historic Leinster Club SFC success in December 2018 and ‘the Messiah’ has now guided his native Cavan to the promised land.

Plotting the downfall of the reigning Ulster champions Donegal, the red-hot favourites, was some achievement by the shrewd Cavan supremo as his totally committed squad battled their way to a richly deserved victory in the provincial final on Sunday last.

"What won it today was just sheer determination and guts. What a magnificent bunch of lads. When everybody else wrote them off and everybody else doubted their ability they stood by each other," was the reaction of Graham who was in dreamland at the Athletic Grounds in Armagh.

"After the relegation in the league these lads showed some resilience and I'm delighted for every single one of them, including the lads who aren't here with us today."

Mickey said it was a great day for everybody including the backroom team.

"We feel we are a big part of a family; we treat each other with respect. At times we might fall out but we'll always go back and give each other a hug or a tap on the back and say let's move on and forget about it.

"The togetherness within the squad is second to none and you can't buy that. Sometimes you have the best footballers in the world, but you need sheer guts and determination and we had it there today."

Going in at half-time two points down was a good result for Cavan, playing against the slight breeze.

"We were happy, to be honest with you. I suppose everybody was hoping we weren't out of sight by half-time going on our previous performance against Down.

“We said the longer we kept it tight, the longer we stayed in the game we would give it one hell of a go coming down the home straight.

"But I thought we played super football in that second half. But again it was the work ethic of the lads. My God, what this means to Cavan I can't explain it. It's just huge."

And it was the second half energy, which Cavan found from somewhere, that made the difference in the end.

"Look, the form was there. We finished strong in all our games and the bench made a difference again today. We smelt an opportunity and we grabbed it."

Asked about now meeting Dublin, it wasn't something that was on Graham's mind at that moment.

"I'm not even going to think about it. I'm going to wait for someone to pinch me ear to wake me up to know that we actually won the Ulster championship."

Graham was fully aware of the gap back to 1997 for a last Cavan senior win in Ulster when he was a member of the triumphant squad.

"I remember it as if it was yesterday. It is a feeling that I will never forget. I know the boys will appreciate this. It is special for Cavan football; it is special for Cavan people. What it has done in the county these last six weeks is huge," said Mickey who paid tribute to those at home watching and listening, for sticking by the players.

"Grab them lads when they come home and give them a huge hug, because they have done you proud here today," concluded Graham.