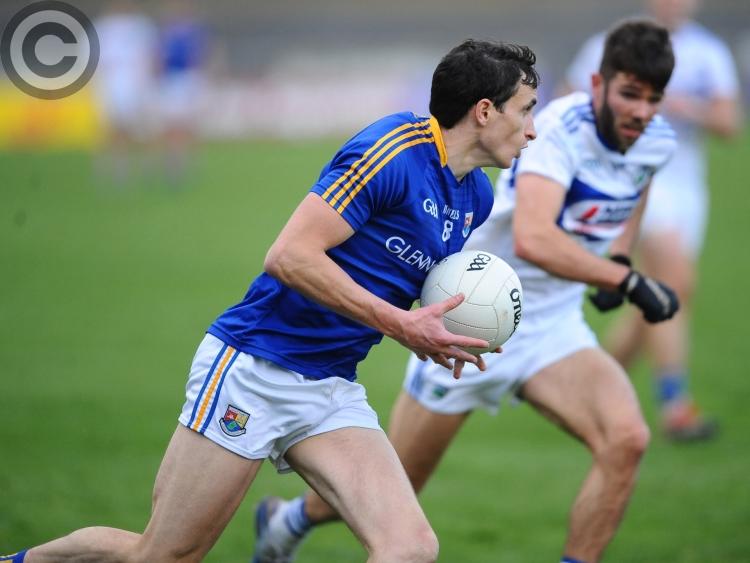 Darren Gallagher on the ball for Longford in breaking away from Laois opponent Daniel O'Reilly. Action from the Leinster SFC quarter-final at Pearse Park on Sunday last Picture: Declan Gilmore

Longford midfielder Darren Gallagher believes if his side had put away one of their goal chances on Sunday last things could’ve been so different.

Laois keeper Niall Corbet pulled off two excellent saves at the beginning of the second half to deny Donal McElligott and Dessie Reynolds.

“The fact that we didn’t put them away, it kind of gave them a bit of a lift. Our heads went a bit and we started panicking a little. A bit more calmness was needed.

“We needed to keep that scoreboard ticking over. We weren’t winning kick-outs when we needed to; just one or two of them would’ve made a difference. It’s a hard pill to swallow.”

Gallagher likened the Laois game to a qualifier game against Kildare in the recent past where Longford made a great start but Kildare caught them in the end.

“It’s like the Kildare game a couple of years ago in Pearse Park in the qualifiers when we had a couple of chances early on. They came back at us at the end and beat us. We have to learn from these things.”

The Granard man has been an ever present for Longford and has put in some excellent displays. He can be very critical of his own performance as he strives to be the best he can.

“I always go with the motto ‘you are only as good as your last game’ and unfortunately today was my last game this year. It’s a frustrating one especially when you don’t have a game next week to put that right.

“Against Derry I was poor but I got the bit between my teeth for the Louth game. Against Laois I couldn't shake my marker to get on the end of the ball when it would fall for you on another day.”

He admitted he overthinks everything and evaluates his own performance and every match he plays in.

“I always want to do better; even last week (against Louth) we made a few mistakes and maybe could’ve had a more comfortable win. Today it’s just frustrating to lose.”

For club and county Gallagher has earned his plaudits but is extremely modest. He’s just delighted to be out playing.

“It’s nice to be thought about like that. I went a long time where I wasn’t even getting on panels. I suppose I’m going through a good spell in my career. I’m 28 now, in my prime as they’d say.”

“I was lucky enough to have a good family and friends around me and coaches and trainers who knew the right time to put their arm around me.

“There were plenty of times when I was going to pack it in; you put in so much effort and things just don’t go for you. Lucky enough the right people at the right time came in.”

The Garda is now wondering what he’ll do with no football for a while. “It’s a break from the monotony of this whole lockdown. It can get to you. It was nice to have football. I don’t know what I’ll do for the next few weeks.”