Longford manager Padraic Davis praises the players for giving everything 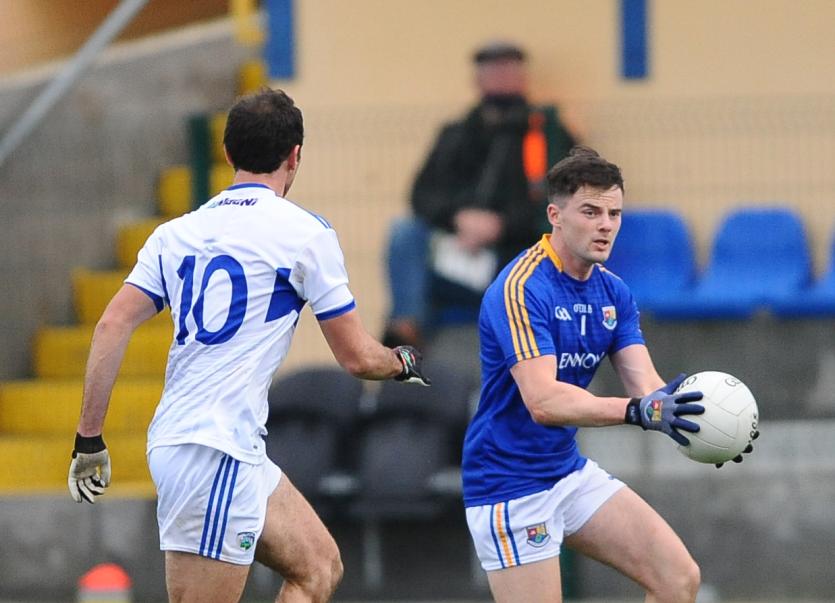 Rian Brady, Longford's chief marksman on Sunday last with five points to his credit, pictured in action against Laois in the Leinster SFC quarter-final at Pearse Park Pic: Declan Gilmore

Padraic Davis admitted going 20 minutes in the second half without a score and Laois hitting seven unanswered points were the difference on Sunday last as Longford fell to a two point defeat in the Leinster Senior Football Championship quarter-final at Glennon Brothers Pearse Park.

The Longford manager said: “They scored seven points on the trot and we kicked some costly wides. That has a huge impact on the game obviously coupled with the two goal chances that we had; if we had even taken one of them it would’ve made it very difficult for Laois.

“It’s unfortunate. 1-10 was a brilliant score in the first half and we didn’t back that up then; four points in the second half was simply not enough.

“Overall the effort levels and the work-rate of the team, they gave us everything. Some of those lads that were taken off were absolutely wounded, there was nothing left. Sometimes you can’t ask for a whole lot more.”

Longford were dealt a blow during the week when Robbie Smyth sustained  a hamstring injury. Davis had hoped to start the prolific forward but could only introduce him late on. He also bemoaned the loss of Oran Kenny.

“We lost Oran Kenny and he was a huge loss to the team. Robbie Smyth, who was absolutely brilliant when he came on in Cusack Park, was very much a contender for starting against Laois  and then he pulled his hamstring on Wednesday night.

“I think Robbie is unfortunate, he came back and I felt bad about putting him in because there was a real chance he could’ve ruptured it. Thankfully I saw him in the car park with a smile on his face.”

For one reason or another several players didn’t make themselves available for Longford this year. Davis would like to have everyone but is happy with the squad of players he has at his disposal.

“It is difficult. It is happening in every county particularly outside Division 1 with Division 3 and 4 suffering in particular.

“We’ll see where the new year takes us. You’re going to have the likes of Mickey Quinn back along with Oran Kenny and Shane Kenny. We feel that the bunch we have are giving us every last thing.”

With the season over now for Longford, Davis hopes the GAA will announce dates and a calendar for next year as soon as they can. He knows it’s difficult for them but clubs and counties need clarity going forward.

“Longford needs that. Let’s not forget we are at the semi-finals stage of the club championship. We need it probably more than anybody to know exactly where we are going.

“ I think the GAA will give us an idea as soon as they possibly can. It’s difficult for them to make that decision.

“It’s been a satisfactory year for Longford to be fair. We came very close to achieving something of note; back to back championship wins. It’s disappointing that it hasn’t worked out.”