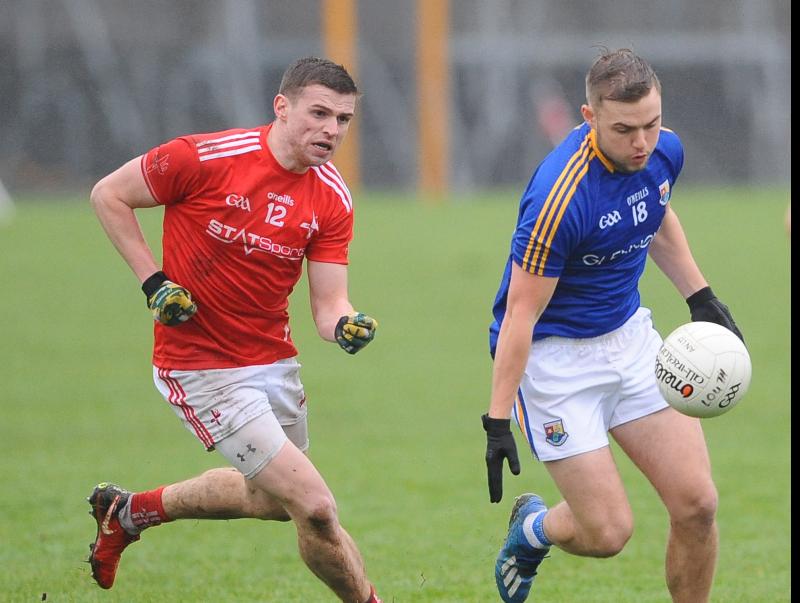 Mostrim's Darragh Doherty on the ball for Longford ahead of Louth opponent Conal McKeever. Action from the Leinster SFC first round game in Mullingar on Sunday last Pic: Declan Gilmore

There is no rest for Longford in the aftermath of their bruising battle to beat Louth by the narrow margin of two points in extremely difficult conditions on a miserable wet day in Mullingar on Sunday last.

It’s a quick turnaround for manager Padraic Davis and his players as the county team prepare to take on Laois in the behind closed doors Leinster Senior Football Championship quarter-final at Glennon Brothers Pearse Park this Sunday, throw-in 1.30pm.

With little time to recover in the space of a week, a cause for concern is the dead leg injury sustained by Darren Gallagher after he produced a powerful performance in the first half of the opening round clash against Louth at TEG Cusack Park.

Fortunately for Longford, the gutsy Granard man was able to continue on the changeover and found the energy to shoot the lead point in the 69th minute when a draw and extra-time was looking the likely outcome.

Impact substitute Robbie Smyth then shot over the bar in the third minute of stoppage time to clinch a hard earned win in the stamina sapping dreadful winter weather.

With home advantage there will be a quiet air of confidence in the Longford camp for the showdown against Laois despite the absence of the supporters in compliance with the current Covid-19 restrictions.

Quirke must plan without suspended midfielder and captain Kieran Lillis, who received a straight red card in the final league fixture against Fermanagh, and this powerful player will be a big loss.

While Laois were fortunate to survive in Division 2 of the National League, scoring three late goals in a sensational finish in the eventual 3-12 to 1-11 win against already relegated Fermanagh at Brewster Park, a couple of other significant results were achieved earlier in the season.

A draw against the league title winners Roscommon and a win over the also promoted Armagh is a better guide as to where Laois stand in the rankings at the moment.

Having said that, Quirke must have been extremely disappointed with the tame surrender in the 1-13 to 0-8 defeat against Westmeath in the recent Division 2 clash at TEG Cusack Park in Mullingar after over seven months without inter-county action.

Inconsistent performances have blighted the progress of Laois football in the recent past and things reached a very low ebb when they ended up in Division 4 in 2018.

Ironically, they succeeded in reaching the Leinster final (losing heavily to Dublin) in that same year under the guidance of another Kerry native John Sugrue and consecutive promotions in the National League were also achieved.

So Laois are now operating in a higher grade than Longford and when the counties last clashed in the Leinster Championship at O’Moore Park in 2017 the home side scored a comprehensive 4-15 to 0-16 success in the first round meeting.

At least the current Longford team will not have to face the serious threat of the tormentor Donie Kingston who has departed from the Laois squad.

The obvious dangerman in their attack is the lethal Gary Walsh, who clocked up the impressive total of 2-5 against Fermanagh a couple of weeks ago, while the Longford defence will also need to keep a close watch on another quality forward in Evan O’Carroll.

The physically strong John McLoughlin is apparently an injury doubt but if fully fit he will be going all out to make a big impact at midfield while there are also injury worries over another vastly experienced player, defender Colm Begley.

Laois enter the championship arena after receiving a bye in the first round.

While a close encounter is probably in prospect, this is a game that Longford have to  believe in their ability  in the bid to come out on top and particularly so on better ground depending on the weather.

The reward is a Croke Park appearance in the Leinster semi-final against Dublin or Westmeath the following weekend.

No matter what happens against Laois on Sunday, Padraic Davis can certainly feel pleased with the steady progress that Longford have made in a very strange year.

Longford v Laois will be streamed live online on the GAAGO service for €5. Go to gaago.ie