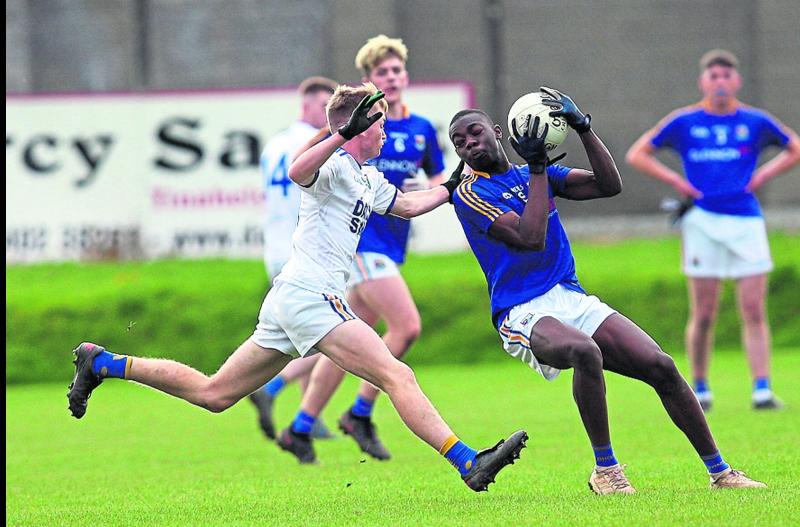 Mark Odukoya (Slashers) on the ball for Longford. Action from the Leinster Minor (U-17) Championship first round game against Wicklow in Aughrim on Saturday last Photo: Joe Byrne

Three second half goals consolidated a comfortable win for Wicklow over the Longford U-17s in the first round of the Leinster Minor Football Championship in Aughrim on Saturday last.

Wicklow were the better team throughout the game and while well beaten Longford tried hard to stay in contention and played their best football in the second half, the midlanders are now out of the championship.

Shorn of at least two regulars from the starting 15 due to Covid-19 complications (close contacts), Brian Noonan and Vinny Nally’s side were always fighting a losing battle against an inspired Wicklow side who enjoyed a dream start when lethal full-forward Eoin Doyle scored a goal in the opening minute of the game.

The home side led by 1-10 to 1-2 at the break with Longford’s goal coming early on after Micheal Hynes pounced on some indecision in the Wicklow defence to shoot to the net.

Longford did show some of their potential early in the second half when they closed the gap to six thanks to a goal from Emmet Brady and a Hynes pointed free.

But then Wicklow centre-half-forward Joe Prendergast struck for two goals in as many minutes immediately after to more or less kill the game off as a contest with the score standing at 3-13 to 2-3.

Full credit to the visitors as they battled right to the end with Hynes proving to be their star man throughout the game.

The early Wicklow goal was a  blow for Longford and while they got back in contention when Micheal Hynes found the net, it was a struggle for the remainder of the first half and all they could manage was a point apiece from Josh Sorohan (created after a strong run from Sean Morgan) while Emmet Brady was on target from a sweet strike in the 27th minute.

Wicklow points from Finn Treacy and Eoin Doyle (free) left 10 points between the sides early in the second half but then Longford found their feet to score 1-1, the point from Hynes (free) and the goal from Emmet Brady.

That revival was cut short with a superb JP Nolan point for Wicklow and then Prendergast struck for his two-goal salvo to make it 3-13 to 2-3.

Longford recovered well and they bagged the next three points on the trot through Kevin Tansey, Micheal Hynes and Josh Sorohan but disaster struck after 46 minutes when Cathal Baker got in for a goal to make it 4-13 to 2-6 to put the issue beyond all doubt.

Points from Hynes and Brady (free) either side of the second water break made it 4-13 to 2-8 while Wicklow goalkeeper Jack Sargent pulled off a fine save from the boot of Tansey after 54 minutes. The Garden County netminder came to the home side’s rescue from the subsequent ‘45 when it fell to Hynes but Sargent saved his shot.

A point from Tansey and a goal from substitute Ruairi Corcoran closed the gap to seven after 57 minutes but Wicklow were just too strong for a gallant Longford side in advancing to meet Offaly in the next round.

What perhaps has gone unnoticed by everyone in these strange times is that, for the first time in Longford GAA history, a player of African heritage played at County Minor level.

Mark Odukoya (pictured), who has played with Longford Slashers all the way up through the underage ranks, made his debut at midfield against Wicklow on Saturday. It’s a massive achievement for Mark and everyone in the Slashers club  is proud of him.

Longford Slashers Minor Club PRO Justin Gray said:  “We look forward to the day when this becomes a regular feature of County teams. Our club is blessed to have many players from “non traditional” backgrounds playing with our teams and our club is much stronger for that. Well done Mark.