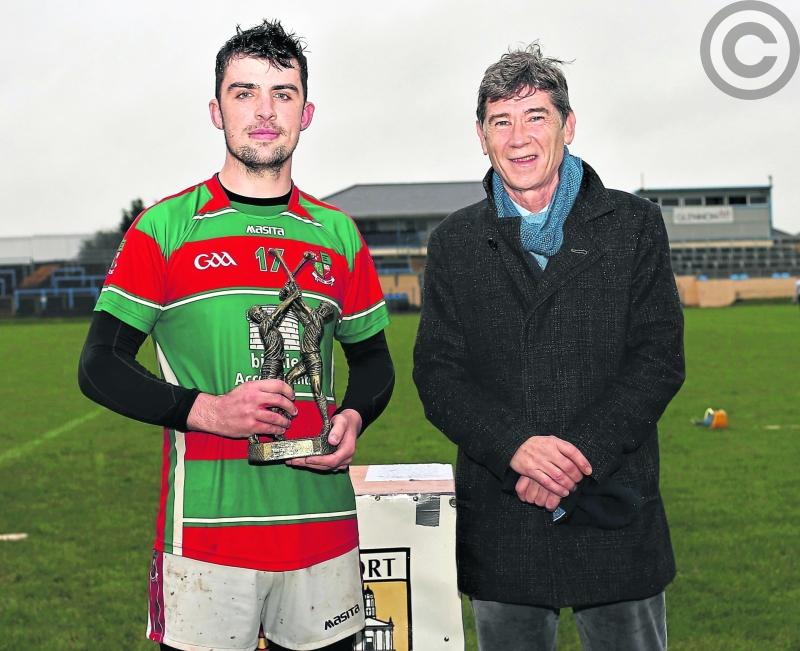 For Slashers, the long wait goes on, it is 19 years since they won their last county hurling title. It was a disappointing day for Slashers who ended the game with 13 players. Sean Stakelum was sent off in the first half for two yellow cards while substitute Shane Maguire was dismissed late in the game for two yellow cards.

In the 19th minute Slashers went ahead for the first time. Gareth Ghee’s shot came off the post and in a goalmouth scramble Paul Leonard kicked the ball to the net.

Slashers led by 1-4 to 0-5 at the break but only managed to register two more points on the changeover and were well  beaten in the end with the wide margin of ten points separating the sides at the final whistle.

Wolfe Tones produced a strong second half performance in adding another 3-5 to their tally on their way to winning the Longford Senior hurling title for the 20th time.

The Mostrim club created two goal chances before it was third time lucky in the 39th minute when Maitiu O’Donohoe capitalised on a mistake by Johnny Casey to find the back of the net.

The Tones got a decisive second goal in the 48th minute when Martin Coyle put in some excellent work to set up Evan Tully and he hit a powerful shot to the net.

The worthy champions scored a third goal in the second minute of stoppage time when Daniel Connell found the back of the net with a superb strike.

It was John Newman who opened the scoring inside the first minute and a fine point from man of the match Maitiu O’Donohoe gave Wolfe Tones an early lead.

Eoin Donnellan got Slashers first score in the third minute from a free but a great point from Martin Coyle and a ‘65 from John Mulhern stretched the Wolfe Tones advantage.

Daire Regan replied for Slashers but they were dealt a significant blow in the 14th minute when Sean Stakelum was sent-off. A free from Mulhern restored Wolfe Tones’ three point lead.

Despite being down to 14 players, Slashers remained in contention with another free from Donnellan after Ciaran Farrell was fouled to cut the gap to two in the 16th minute.

Three minutes later and Slashers went ahead for the first time. Gareth Ghee’s effort came off the post and in a goalmouth scramble Paul Leonard got a foot to the ball to shoot past opposing keeper Andy Kelly.

Wolfe Tones then hit two wides while in the 26th minute Donnellan hit over another free after Ghee was fouled. The point put Slashers ahead by two. In first half stoppage time a long range free from Aidan Sheridan caused problems for the Slashers defence but Daire Regan was able to clear the danger.

Two points from John Mulhern levelled matters in the 33rd minute and two minutes later he hit over a fine score to put Wolfe Tones back in front. Conor Gallagher then saved an Ian Campbell effort and just seconds later Mulhern flashed a shot wide.

In the 39th minute Mostrim got their first goal through Maitiu O’Donohoe before Eoin Donnellan converted a free in the 43rd minute for Slashers first score in the second half.

Wolfe Tones substitute Daire Duggan then hit over a terrific point while Donnellan fired over his fifth free in the 47th minute to close the gap to three but that was to be Slashers’ final score of the game.

One minute later Wolfe Tones got their second goal with Evan Tully finishing the ball to the net and that proved to be a killer blow for Slashers.

Maitiu O’Donohoe followed up with a point and Slashers suffered another setback when Shane Maguire was sent-off for a second yellow card offence in the 59th minute.

It all went wrong for Slashers in the second half and their tale of woe was complete when Wolfe Tones got a third goal in stoppage time with James Farrell setting up Daniel Connell for the final score in the final.