Brilliant start sets up Clonguish for Longford U-16 championship glory 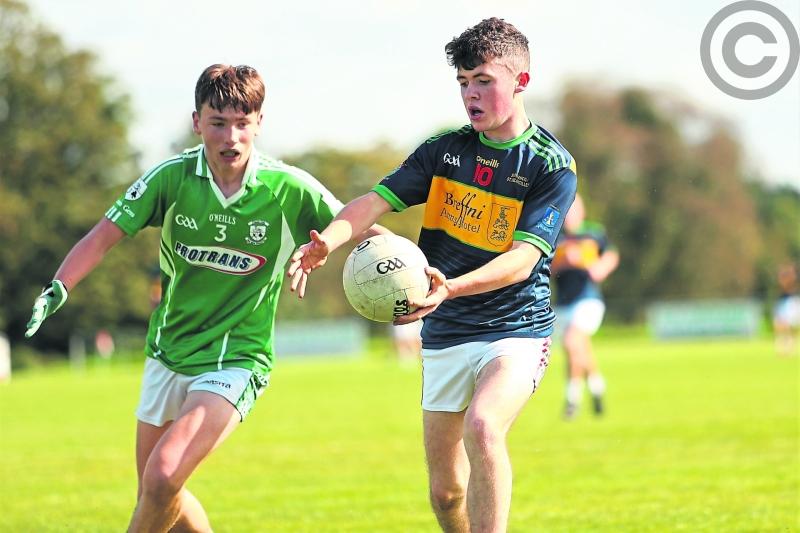 Sean Smith on the attack for St Colmcille's/St Francis with Clonguish defender Conor Flynn closing in to challenge. Action from the Juvenile 'A' Football Final on Saturday last Pic: Syl Healy

Boosted by a brilliant start with Michael Flynn breaking through to score a cracking goal in the opening minute, Clonguish Og never surrendered the lead on their way to winning the Juvenile Football Championship title.

A second goal followed from Andrew Flynn midway through the first half of the entertaining county final at Maguire Park, Ballinalee on Saturday last to put Clonguish in a strong position.

St Colmcille’s/St Francis battled back to close the gap with goals from Eoghan Williams and John Boyle (a brilliant strike) and just three points separated the sides at the break, 2-5 to 2-2.

Ballymore amalgamation got back into contention when Dylan McCabe  finished the ball to the net.

It was extremely tight for the remainder of the match but Clonguish managed to consolidate their grip on the game to emerge victorious without one of their best players, the long term injured Matthew Flynn who had a shoulder operation seven weeks ago.

While Michael Flynn (who was most impressive) and Andrew Flynn were very prominent in the Clonguish attack, clocking up 1-3 apiece, special mention must also be made for Jonathan Burke whose workrate was immense in popping up all over the pitch.

Powerful midfielder Matt Duffy was the stand out player for the gallant losers St Colmcille’s/St Francis who were left to rue a few missed chances in the first half including a glorious goal opportunity with Lorcan Reilly shooting narrowly wide in the 8th minute.

Clonguish Og, on the other hand, were extremely sharp in attack to lead by 2-2 to 0-1 after 14 minutes, the points coming from the goalscorers Andrew Flynn and Michael Flynn (free).

Corner-forward Ronan Corcoran got the first score for the amalgamation after three minutes and a well-worked move involving Dylan McCabe and John Boyle led to their opening goal from Eoghan Williams in the 17th minute.

Points were then exchanged between Andrew Flynn and Sean Smith (free) and when John Boyle blasted the ball to the back of the net in the 29th minute the St Colmcille’s/St Francis side were only trailing by a point, 2-3 to 2-2.

Clonguish finished the first half strong in adding two more points to their tally through Matthew Carey (a very well struck free) and Michael Flynn and another 1-1 followed early on the changeover.

Daniel Carey got the crucial goal with Michael Flynn shooting over the bar to leave Clonguish in a commanding 3-6 to 2-2 lead.

St Colmcille’s/St Francis reduced the deficit with a goal from Dylan McCabe in the 37th minute and then came a point from Sean Smith.

The amalgamation were pressing hard with John Boyle having a goal attempt blocked down and another couple of good chances were squandered before the pressure was eased on Clonguish when Matthew Carey converted a free in the 52nd minute.

Another point followed from Andrew Flynn and while St Colmcille’s/St Francis replied with a score apiece from Dylan McCabe and Matt Duffy they were unable to engineer an equalising goal as time ran out.