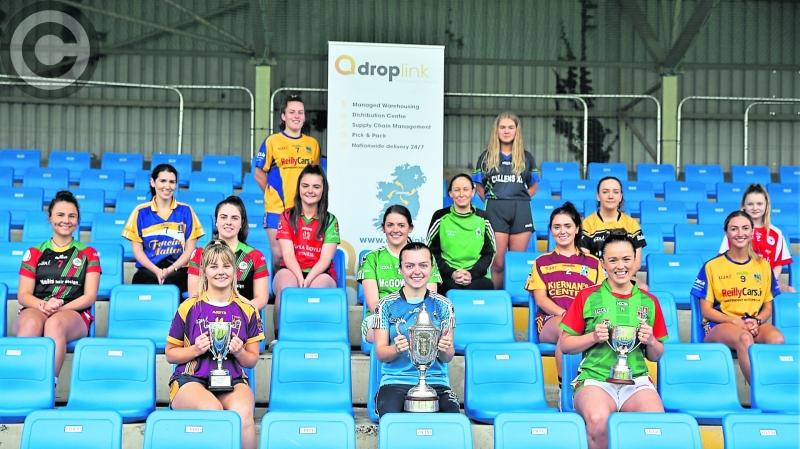 Players representing each of the ladies football clubs in Longford who contested the Droplink Senior, Intermediate and Junior Championships with the 2020 county finals this weekend Pic: Gerry Rowley

It’s the clash of the 2018 champions against the 2019 champions in the Longford Ladies Senior Football Final at Glennon Brothers Pearse Park this Saturday when Carrickedmond take on Longford Slashers in what promises to be a cracking contest, throw-in 2.30pm.

Both sides have made great strides over the years to become two of the top teams in the county. Carrickedmond ended a 31 year wait for senior honours when they won the championship back in 2018 while last year Slashers won their first senior title  since 1982.

It’s 40 years since Carrickedmond Ladies club was founded and what better way to celebrate that milestone than to win the Senior title but holders Slashers will not relinquish the county crown without a fierce battle.

Slashers topped Group 1, winning all three fixtures. Their second game was against Carrickedmond and there were just two points between the sides in the end. Saturday’s game will be another tight affair with very little between the sides.

Killashee the Slashers girls recorded a good win. It was a different story in Moran Park for Carrickedmond’s last eight meeting with Mostrim. There was no score in the first half and in the end a goal separated the sides:1-3 to 0-3.

In the semi-final Carrickedmond gained revenge against Clonguish who knocked them out of the championship at the same stage last year.

At the first water break Clonguish were leading by three but Carrickedmond turned the game around and went in at half-time with a three point lead; Sarah Shannon scoring their first goal.

The 2018 champions put in a great display in the second half and added a further 1-8 to their score with Claire Greene getting their second goal as they ran out winners by 10 points.

In their semi-final clash with Grattans, the Slashers side showed why they are champions with an excellent display. Just like their quarter-final they started slow but gradually began to assert their superiority to run out convincing winners.

Both sides have shown their class in getting to the final and can change the game to suit the elements and their opposition. Carrickedmond, in particular, were able to grind out that result against Mostrim in the quarter-final.

Both sides have terrific forwards but also players in other positions who can chip in with scores. Saturday’s game will be about both defences and how they can cope when the pressure comes on.

Slashers are a young side that play good attacking football. Laura Kenny, Aine Barry and Orla Nevin are top defenders but Nevin also likes to get up the field too.

In midfield they have the excellent pairing of Aoife O’Brien and Grace Shannon while their forward line is very sharp. In their semi-final win all six forwards were on the scoresheet.

Aisling Cosgrove is a terrific footballer; Clare Farrell is another great player while Carrickedmond will need to keep Jessica Barry quiet if they are to win on Saturday.

In the Carrickedmond side is Michelle Mulvey who belies her age with the performances she puts in.

In defence Caoimhe McCormack. Ciara Mulligan and Gemma Fay will need to put in a strong display.

The Carrick midfield of Ellen Shannon and Michelle Noonan will have an interesting battle with their Slashers’ counterparts. This is an important area for both sides and a vital factor.

Former Longford player Claire Greene is now with Carrickedmond and she is a huge addition for them. They also have excellent players like Sarah Shannon and Lauren McGuire in their forward line.

Saturday’s game will be an intriguing battle and it will be very close. Carrickedmond have the experience but Slashers have the overall ability to win back-to-back titles.