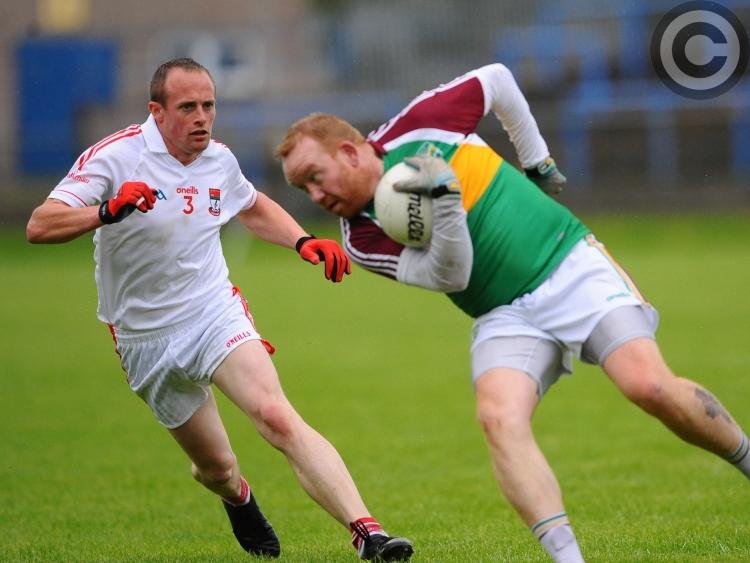 Paddy Ganley on the ball for Ardagh/Moydow in his bid to evade the challenge of Ballymahon defender Matthew Daly. Action from the IFC semi-final on Saturday evening Picture: Declan Gilmore

Beaten by Ballymahon after a replay at this same stage of the second tier championship last year, Ardagh Moydow gained sweet revenge to reach the 2020 Intermediate county final at the end of September with the impressive Paddy Ganley kicking a total of six points.

The atmosphere at a deserted Glennon Brothers Pearse Park on Saturday evening was strange, to say the least, and from the moment Killian Farrell fired home the first goal for Ardagh Moydow in the 18th minute the pressure was firmly on Ballymahon who trailed by five points at one stage of the first half.

While last year’s beaten finalists got right back into contention with a goal from Mark Connor in the 23rd minute to trail by just two points at the break (1-5 to 1-3), Ardagh Moydow were in no mood to let the game slip from their grasp and made a brilliant start to the second half.

A glorious point from Killian Farrell was followed by a decisive goal from young Dylan Coady who got badly injured in the process of finding the back of the net with just a couple of minutes gone on the changeover.

When defender Mark McCord then surged forward to shoot over the bar in extending the comfortable Ardagh Moydow advantage, the writing was on the wall for a very disappointing Ballymahon outfit who ended up losing by the wide margin of seven points in the finish.